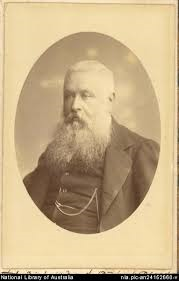 Alfred Cheeke was a judge of the Supreme Court of New South Wales who once lived at Varroville house. Deeply respected, kind and courteous, Judge Cheeke left an indelible mark on the legal history of New South Wales. Yet it was his love of horse racing that most people recognize or remember him by.

Alfred Cheeke was born 10th March 1810 in England and migrated to Sydney in 1837, having been 'lured by rosy prospects of quick advancement in the burgeoning colony'. Later that year he was admitted to the Bar of New South Wales and made a magistrate in 1838. He went on to hold numerous legal positions until appointed Supreme Court judge in 1865. In these positions his justice, patience and mildness won him public acclaim and his conduct was said to have brought him more friends and fewer enemies than any other public officer in the colony. Despite this reputation, the Empire newspaper wrote in an article under the heading of "The Turfman of New South Wales" about Cheeke that "not one more thoroughly the type of blunt, straightforward Englishman, who, whether he loses or gains by it, will blurt out whatever comes into his head, and often makes a great mistake by so doing". Perhaps someone held a grudge! His most famous case was probably the trial of Henry O'Farrell for attempting to assassinate HRH The Prince Alfred, Duke of Edinburgh at Clontarf in 1868.

Judge Cheeke purchased the Varroville Estate in 1859. While he was there he finished the construction of the third house on the Estate started by the previous owner George Taylor Rowe. It was at Varroville that he established a horse stud, training and breeding horses, and went into partnership with the famous trainer of the day John Tait. A private racecourse was established on the flats below Varroville (see my previous post on this at http://campbelltown-library.blogspot.com.au/2015/08/where-was-our-first-racecourse.html ). Cheeke often used the nom-de-course Mr A. Chaffe. His most famous horse racing accomplishment was when his horse Clove won the first AJC Derby in 1865. He was trained at Varroville. His most successful horses however were Zoe and Zingara.

Judge Alfred Cheeke died at his residence in Darling Point Road on 14th March 1876. He is buried in St Jude's Cemetery at Randwick.

Sources
Posted by Andrew Allen at 12:06