March 1863, a train from Sydney pulls into Campbelltown carrying the body of convicted bushranger Henry Manns.
The son of William Manns, a ticket-of-leave man and his wife Mary, Henry was baptised at St Peters, Campbelltown in 1839. The family went to the Adelong goldfields where Henry worked as a carrier before becoming involved with bushranger Frank Gardiner.
At just 24, Manns, with nine other members of Frank Gardiner's armed gang took part in the holdup of the gold escort at Eugowra on 15 June 1862.
Captured in Wombat (near Young) he stood trial with three other members of the gang on 3 February 1863 but was the only one sentenced to death at Darlinghurst Gaol on 26 March 1863.

The residents of Campbelltown tried in vain to save Henry's life, seventy one had signed a petition for mercy and ultimately fifteen thousand signatures were obtained, but to no avail. Henry Manns had confessed to his crime and was to be hung, but he suffered a terrible death in a botched execution that was reported in graphic and awful detail by the Sydney Morning Herald the following day:

"When at length...the bolt was drawn, there ensued one of the most appalling spectacles ever witnessed at an execution. The noose of the rope, instead of passing tightly round the neck, the knot coming round in front of the face, while the whole weight of the criminal's body was sustained by the thick muscles of the poll (head). The rope in short, went round the middle of the head and the work of the hangman proved a most terrible bungle. The sufferings and the struggles of the wretched being were heartrending to behold. His body swayed about, and writhed evidently in the most intense agony. The arms repeatedly rose and fell, and finally, with one of his hands the unfortunate man gripped the rope, as if to tear the pressure from his head, a loud guttural noise proceeding from his throat and lungs, while blood gushed from his nostrils, and stained the cap with which his face was covered. The awful scene lasted for more than ten minutes when stillness ensued, and it was hoped that death had terminated the culprit's suffering..." 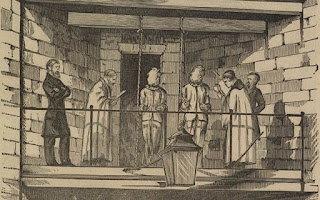 Darlinghurst Gaol (courtesy https://www.nas.edu.au/place/old-darlinghurst-gaol/
Unfortunately Henry's suffering wasn't over, thought to be dead, his body then started convulsing and at the risk of another sickening scene, the doctor present, with the aid of four confines, held the dying man up in their arms while the executioner readjusted the rope and the drop was completed. Further indignities followed with the gaoler caught trying to steal the new boots from the corpse.

At his mother's request, the body was handed over so he could be buried in his birthplace of Campbelltown. Manns' body was taken by train, where he was buried at St John's Cemetery by Father Roche on 27 March 1863 in an unmarked grave.
In one final act of indignity, while his grave was being prepared, it is believed that his body was put on show in one of the hotels (reportedly the Sportsman's Arms - later know as Lack's Hotel) in Queen Street as a terrifying deterrent to the local young men of Campbelltown of the fate of bushrangers.