The tale is told of Jack Nash, dairy farmer and sportsman, playing cricket in Mawson Park, and hitting a six all the way to the railway line! The story goes that the ball went all the way to Sydney on the train! Whilst we can't verify this, we can give the following information about Jack.
Jack Gordon Nash was born in 1900 to Florence and Henry Nash, and his early life was spent at the family home in Leumeah -  "Merriwee".

Jack married Bess (nee Sedgewick) in 1933, and moved from the home in Leumeah to the dairy farm "Birriwa" which was situated on Camden Road, between the traffic lights at Waterworth Drive and Mount Annan Drive. "Birriwa" was part of the original Smeeton grant.
Jack was variously described as "really robust", "a real character", "a really big man", and "a really wild bloke!". It was clear he loved his sport - photos show him in both football and cricket teams, and sports reports from the day record him as being talented at both games - try scorer, skilled bowler, and evidently a strong batsman as well! Jack would run from Kenny Hill to Campbelltown for his football training.


The family continued to farm at "Birriwa" for many years. Jack 's son Don worked as a milk vendor, but also worked with Jack until the dairy closed in 1969.  They bred Ayrshire cattle with the stud name Birriwa. 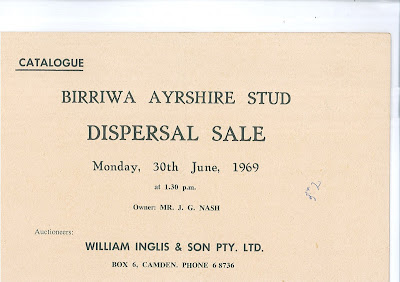 Jack passed away in 1973 - he is remembered in the area through the Jack Nash Reserve at Curran's Hill , and the farm is remembered through Birriwa Reserve, Birriwa Circuit and Birriwa Community Hall at Mount Annan.