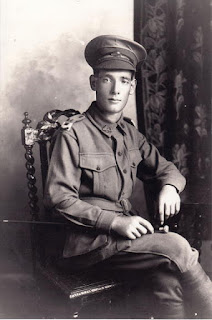 One of Campbelltown's bravest soldiers was Walter John Hagan. He was born in Campbelltown on the 14th of February 1892. At the age of 23, he decided to enlist in the AIF in January 1916.

Walter left Sydney Harbour on the Beltana on the 13th of May 1916 and arrived in England in July. After further training, he proceeded to the frontlines in France, , as a runner with the 36th Battalion. In 1917, his unit was moved to the Ypres Sector in Belgium, where they took part in their first major operation, the Battle of Messines on the 7th of June. Following on from this success, they then participated in the Third Battle of Ypres, fighting in the mud around Passchendaele Ridge on the 12th of October. The following day Walter was reported missing in action.

Back in Campbelltown the Hagans awaited for news of Walter for about 6 months. When the bad news eventually reached them of Walter's fate, they were naturally devastated. A Court of Enquiry concluded that Walter was killed in action on 12th of October 1917 at Passchendaele Ridge. A Captain Goldrick gave his report: We were in action at Passchendaele on the 12/10/17 near the Cemetery. Hagan was my Runner. I had just asked him to take a message and he replied "Very Good, Sir", when he fell shot by a machine gun bullet.

No trace of Walter's resting place could be found and the whereabouts of his body is still unknown. He was posthumously awarded the Military Medal for "magnificent conduct". His name is recorded on the Menin Gate memorial in Belgium. Walter's brother William also served in the Great War and survived.

HOKIN, Lauren
ANZACs of Macarthur: The Men and Women who served in The First World War
Campbelltown: Veteran's Recreation Centre
Posted by Andrew Allen at 10:45