An Interview with Rita 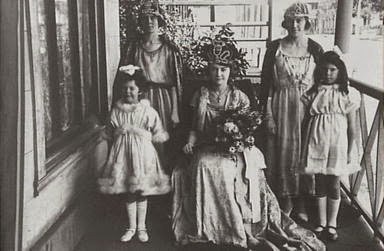 Queen of Campbelltown Competition, 1922. Rita is the queen seated in the middle of the photograph.

In 1977 seventy three year old Rita Brunero gave an interview to the library about her life in Campbelltown. The interview took place at her home at 28 Oxley Street. Rita's interview is one of 119 sound recordings that the library has now digitised and is to be made available on the library's website.

Rita Brunero, formerly Tripp, was born in Campbelltown in 1904, the daughter of Charles and Maria Tripp. Her interview provides an insight into what life was like in Campbelltown for a young girl in the early years of the twentieth century. Campbelltown was then a small village and far enough away from Sydney to be regarded as a country town. Life was simple for a girl like Rita but still full of adventures and memorable moments that she recalled with fondness in her interview in 1977.

Rita was there in 1917 for the "Jack's Day" Regatta on the reservoir in Allman Street. She remembered the day fondly. The navy used it to raise funds for the war effort and people would pay to have a turn on row boats floating on the reservoir. Rita made sure she had a turn on a boat. On that same day her younger sister lost her gold bracelet there and Rita, not knowing she had taken it, was devastated when she found out. The bracelet had been given to her by a young man who went to war. The next morning at 5.30am she went back to the reservoir and found the bracelet in the grass!

She went on to talk about the night that electricity was first turned on in Campbelltown in 1926. (1924 ed.) A large crowd including Rita had gathered at the electricity station in Cordeaux Street for the switching on at 7pm. Her family had left the switches turned on and when they returned home they found their house lit up like a Christmas Tree!

In the interview she talks about her father and how he was a pioneer in developing radio (see my earlier blog post on Charles Tripp). He would get her to test the sound by going into a nearby room or on the verandah. If it worked there would be great excitement in the house.

Rita married Leslie Brunero, an Italian migrant who was to establish a saw mill in Patrick Street. She fondly recalled how handsome he was and how nervous she was that her parents would not allow the couple to marry because of his background. If they had not given permission she would've accepted this as back in those days one never argued with your parents. Fortunately they took a liking to the friendly Italian.

I hoped that Rita might've discussed the photo shown above of her as Campbelltown Princess in 1921 but unfortunately she didn't. One can imagine the excitement she would've experienced that day too.

Rita Brunero lived the rest of her years in Campbelltown. She died in 1982 aged 78 and is buried beside her husband in St John's Catholic Cemetery.

Rita's interview and the other 119 sound recordings will, in the near future, join our current oral histories on our website at http://www.campbelltown.nsw.gov.au/OralHistories.

I will keep you informed of the project's progress on this blog.