"The Campbelltown Sensation" was one of a number of dramatic headlines that filled both local and national papers in the late Autumn of 1905. The small village of Campbelltown was left in shock at the news of the attempted murder of a young woman by a man from a well known and respectable local family. The incident left the community shaken in a way similar to the Richardson-Lack murders 56 years earlier.

On the morning of the 17th of April 1905 shortly after 9am, 20 year old Thomas Oxley Kershler visited the residence of the parents of Maud New, a girl he had been seeing for the past eight months. The house was located in Broughton Street, Campbelltown. Maud was alone at the time in the kitchen attending to the fire when Kershler entered. He first sat on the kitchen table. She said in her evidence in court that she was "suddenly struck across the face with a poker, and, on turning round, saw that the accused's face wore a peculiar expression. He had a horrible look in his eyes, as if he were mad."

Maud quickly ran out of the house but was chased by Kershler and she was hit on the head several times by the poker. Despite her severe injuries, she managed to grab hold of the poker, and got it away, but Kershler secured it again. He hit her again a number of times and she fell to the ground. Whilst on the ground she was struck with a block of wood on the shoulder. She got away again but he caught up with her once more and got her by the throat and tried to choke her. She fell and then Kershler picked up a board with nails on it, but she could not remember if he struck her with it or not. He then picked up an axe which was lying close by. She caught hold of the axe and got it from him and then said "Oh Tom don't kill me: if I am to die, let me die easy."

Thomas Kershler didn't let up. He asked Maud "Have you got any poison?" She replied "Yes in there, behind the door." When he asked her to show him where she replied that she couldn't because she had blood all over her face and couldn't see. Kershler forgot the poison and then asked Maud for the axe back. He then went behind the door of the wash-house, and as he did this Maud ran into the next door neighbour's house. During the whole time she was attacked, Maud kept calling "Help! Help! Murder! Murder!

Thomas Kershler was eventually contained by the neighbours. He was reported to have said "I have done it now. I went off in another of those fits." Kershler was driven into town in his cart and gave himself up to police.

Dr Wilson examined Maud New's injuries. He said that they were dangerous but that she would survive.

Thomas Oxley Kershler was committed for trial at the Criminal Court, Darlinghurst on May 29 for having wounded Maud New with intent to murder her. He was found not guilty on the grounds of insanity at the time he committed the crime. The jury, in returning their verdict, added that, in their opinion, the accused should not be allowed out at large. It was recommended by the Government Medical Officer that Kershler be sent to the appropriate ward in Darlinghurst Gaol and kept under strict observation. His honour then ordered Kershler to be kept in strict custody in Darlinghurst Gaol, pending the Governor's pleasure. 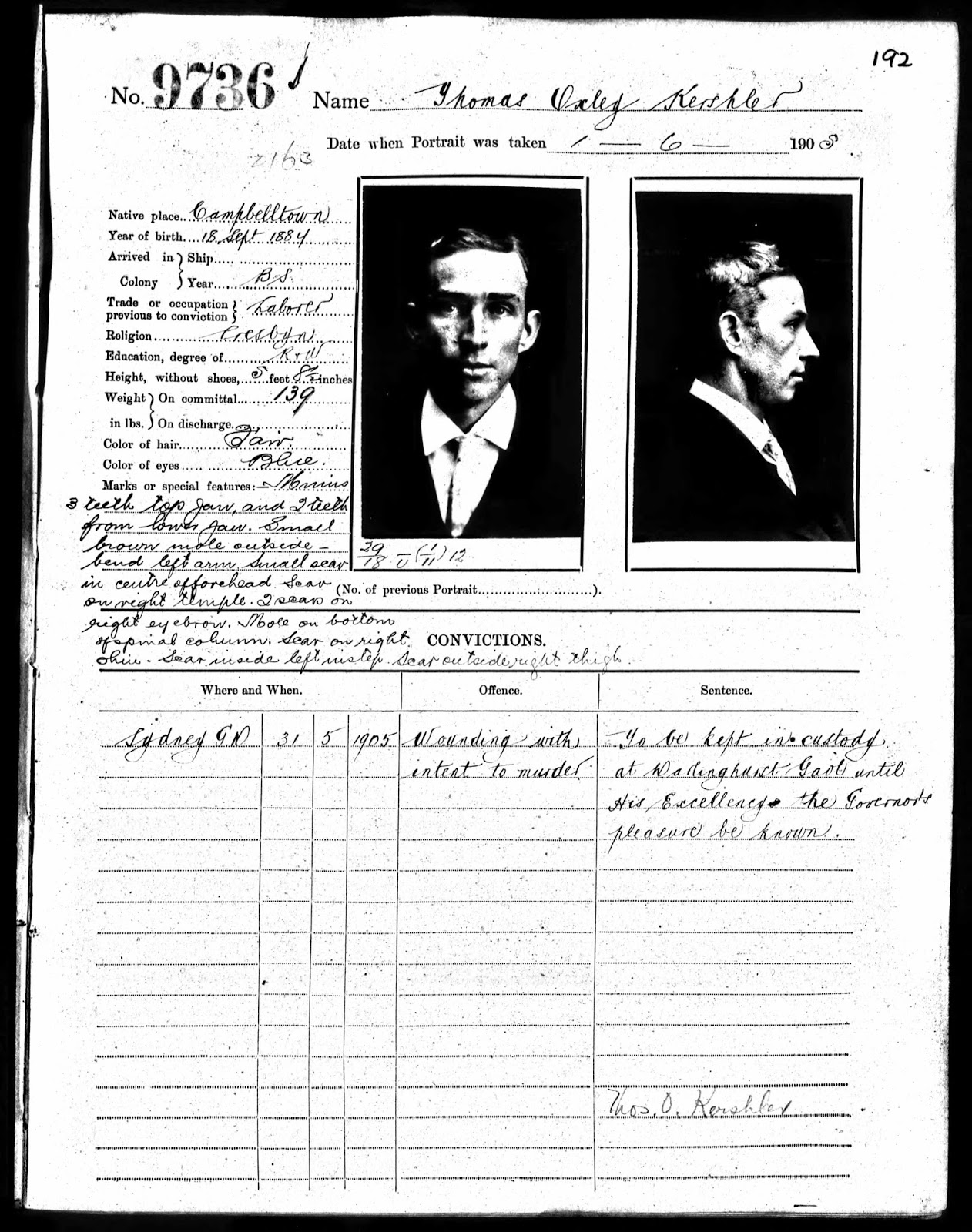 Thomas Oxley Kershler's Gaol Portrait and Description on June 1, 1905 (click on image for a larger version)

Records reveal that Thomas Kershler was released from Darlinghurst Gaol in 1908. He married that same year to Winifred Wilson at Mosman. They had one child named Edwin. In 1924 an item appeared in the NSW Police Gazette: A warrant has been issued by the North Sydney Bench for the arrest of Thomas Oxley Kershler charged with wife desertion. He is 40 years of age, about 5 feet 10 inches high, thin build, fair complexion, fair hair going grey, grey eyes, clean shaven, majority of teeth missing, a carrier. Complainant, Winifred May Kershler, 32 Gerard St, Neutral Bay.

Thomas later got laboring, contracting and storeman jobs around Sydney. His last address was in 1943 at Vaucluse where he was working as a storeman. Later that year or the next he moved to Adelaide with a woman he had been living with. The woman's name was Mary Turner and he had gone into a housekeeping business with her. It was not a particularly harmonious relationship and Mary decided to leave Kershler. On April 11, 1945, the day that Mary broke up with him, Thomas was involved in a melee at Mary's flat in the Adelaide suburb of Norwood. It was the same one that he had been living in with her. Mary's son Lawrence was charged with stabbing Thomas 20 times in the chest with a large sheaf knife when Thomas broke into the flat to retrieve his belongings. Mary Turner was sent to hospital to treat her injuries that she received in the melee. Although both claimed self-defence, Mary at least was found guilty and sent to gaol.

Despite his disturbed past and a life involved with crime, Thomas Oxley Kershler went on to live to the age of 93. He passed away in the Adelaide suburb of Myrtle Bank in 1977. His son Edwin died in Cooma in 1956.

It is unclear what became of Maud New. A search of the Births, Deaths and Marriage records for NSW reveal a Maud New dying in Gunnedah, NSW in 1971. Of all the Maud News that come up in a search for that name, this is the only possibility of being the Maud New that was assaulted in Campbelltown in 1905. Those with the Maud New name that married can all be ruled out for various reasons. It appears that she left the area after the attack.

One can only imagine the horror the families and the Campbelltown community felt at that time. Despite surviving the ferocious attack, poor Maud would have suffered terribly from the memories of that day in Campbelltown for the rest of her life.

This week I serendipitously came across a newspaper item that revealed what became of Maud New. I was checking an unrelated news story and happened to glance at the funeral notices next to it. A September 1961 obituary of a man with the surname New mentioned that he was a sister to a Maud Singleton of Lindesay Street Campbelltown. A check of both siblings parent's names and dates confirmed that this was our Maud and that she was living in Campbelltown! Maud Singleton passed away at Carrington Nursing Home near Camden on 7 September 1981 aged 96. She died five years after Thomas Oxley Kershler who died aged 93. Andrew December 2017.

Maud (actual spelling is Maude) was buried at Camden General Cemetery. Her epitath reveals she was referred to as Maunie. She was born on 9 August 1886. Maude married Jim Singleton in the Randwick area in 1911. 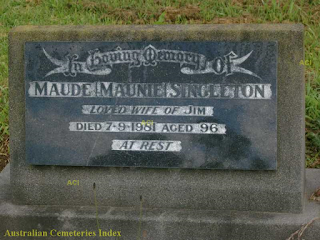 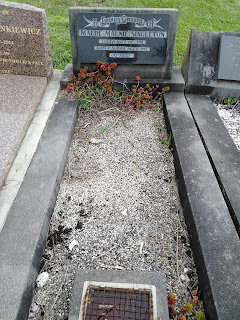