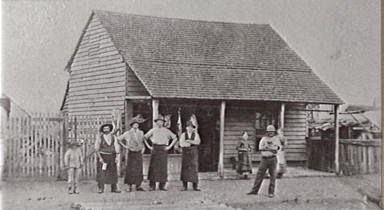 Butchers in front of Wilson's Butcher shop in Queen Street around 1881. The girl on the crutches is Nell Chinooks. (Photo courtesy Campbelltown and Airds Historical Society)

Wilson's Butcher Shop was originally a weatherboard building constructed by cooper turned butcher Daniel Fowler. It stood between today's old post office building and Dumaresq Street. It was built prior to 1860.

James Wilson worked for Daniel Fowler for 16 years. Wilson emigrated to Melbourne in 1857 from Scotland and two years later moved to Campbelltown. He purchased the butcher shop from Fowler in the mid 1870s and in the late 1880s built a new two-storey shop on the same site. It was at 249 Queen Street. The business thrived and was so successful that James Wilson was able to retire thirteen years later. In 1881 James was referred to as a wholesale and family butcher. 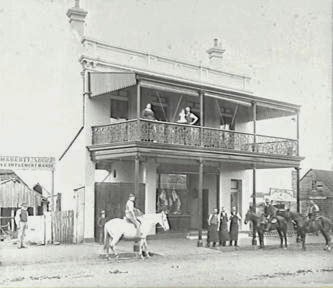 The photo above shows Wilson's Butcher Shop between blacksmith George Mabbot's shop on the southern side and Newling and Walker, cordial manufacturer on the northern side.

James Wilson died in 1912 after suffering from Chronic Bronchitis. He is buried in the Presbyterian Cemetery at Campbelltown.