By now you are probably aware that South Sydney won their first premiership in 43 years last Sunday (this is a touchy subject for this mad Canterbury Bulldogs supporter). Last week I watched a number of news reports that showed what the country and the world was up to 43 years ago when Souths last won the 1971 premiership. So I thought I would look and see what Campbelltown was up to for the week of the 1971 Grand Final by checking out the Campbelltown Ingleburn News for Tuesday, September 14, 1971.

The front page was dominated by plans for Lend Lease Homes to extend the present Sherwood Hills (now Bradbury) housing project.  Plans for lakes and natural open space were high on the agenda. Also on the front page was a photograph of Jo Meyerink with the mayor of the day Clive Tregear. Jo won the Miss Spirit of Campbelltown contest for 1971. In those days the Fisher's Ghost Festival was held in September. Another heading on the front page talked about a "Record Issue" with the paper proudly announcing that this issue contained a record 44 pages!

A large section of the newspaper was dedicated to the upcoming local government elections. A pre-election round up was provided with each candidate promoting their credentials. One thing that struck me was the number of candidates wearing the typical thick coke bottle glasses of that era! The newspaper took a humorous look at the election with page 12 describing the field for the "1971 Campbelltown Stakes". One such horse was Yvonne Bentley (by Big Effort from Likeable Lass). She was described as a petite filly having her first run in this event.

Also making news was the appointment of B.P. McDonald as the new Town Clerk for Campbelltown Council. Four pages of the paper was given to the 125th anniversary of the Methodist Church in Oxley Street, Campbelltown.

Another headline that jumped out at me was a remark made by a Mr P.H. Morton M.L.A. accusing State Member for Campbelltown Cliff Mallam of being a "first class coward". Morton was annoyed that Mallam "talked about a letter but didn't have the guts to lay it on the table of the house". The matter concerned the sale of Campbelltown Golf Course.

Some of the advertisements are interesting and occasionally amusing. Burrows and Hawthorne Photographers advertised children's portraits in colour for only 48 cents. You could also buy a leg of lamb from Coles New World for $1.59! Or perhaps a tub of Eta margarine for 33 cents.

While Souths were preparing to take on St George that week, a last minute field goal to the Campbelltown Kangaroos at Duguid Oval against the RSL Warriors sent them into the Group 6 Grand Final.

So completed a busy news week in Campbelltown 43 years ago. 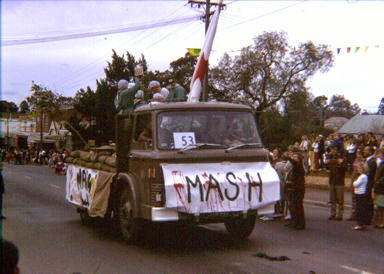