There was a crack like a 'gun blast' that was heard from Menangle. It was regarded a miracle that everyone of the 73 passengers escaped. The date was March 27, 1961- a date that would be etched on the memories of all those involved.

The accident at Glenlee occurred when the engine of the second division of the Melbourne express, due in Sydney at 10.55am hit the engine of a goods train hauling coal trucks from a siding. The engine and four leading cars of the express left the rails after travelling some distance. The fact that there was a bank above the line to Sydney which is not level with the line from Sydney, prevented the carriages from falling right over and not a window in the carriages was broken.

The other astounding fact, according to the Campbelltown-Ingleburn News, was that the main section of the express engine remained on the line after hitting the huge Garrett engine so hard that it ripped the side out of the front tank and threw it yards into the mud near the signal box. It was so badly smashed that it had to be dismantled and removed in pieces.

Four ambulances from the Macarthur area were on the scene within ten minutes. Within one hour over 30 civilian and army ambulances were present. Ambulance men treated a dozen or so passengers for bumps and abrasions. A relief train from Campbelltown conveyed the passengers to Sydney.

News reports also described how within an hour of the accident the narrow road leading from Menangle Road to Glenlee siding was jammed with cars. Sightseers swarmed around the damaged trains and police had to keep them away from the railway gangs.

Local photographer Norm Campbell was on the scene immediately to take photographs. Below is one of those images.

Do you recall the accident at Glenlee? Were you one of the sightseers? Please let us know. 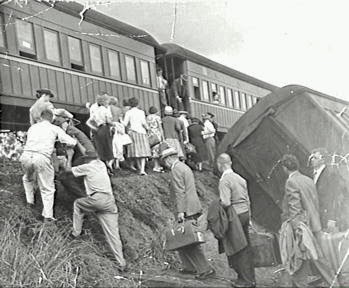