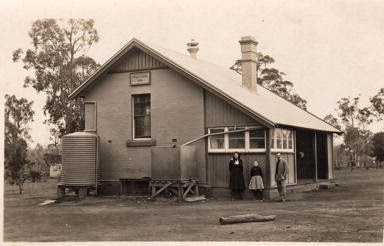 
East Minto Public School was opened in September 1898 in Hansens Road, East Minto. The School, like other surrounding schools, served children who lived within a 3 mile (5 kilometre) radius.

East Minto was a one-teacher school. The school's first teacher was Cecil George Browning Sutton. He remained at East Minto Public until he retired in 1921 and remained in the district as an active community member until his death in 1951. The altar at St James Minto is dedicated to him.

The next teacher was Percy Kable who also taught at Campbelltown Public School. He was followed by Mr Haines or Pop Haines as he was known. A former pupil by the name of Keith Longhurst remembered him playing cricket and rounders with the children at lunch time. He was regarded fondly by his pupils. A Miss Henderson taught years 1-2 while Mr Haines took 3-6.

Keith Longhurst described his days at East Minto further: "We were taught reading, writing and arithmetic. And I don't mean maybe- we WERE taught. The only thing that spoilt my school life, if any, was that I was shifted from 2nd class to 4th class in one jump and it was a long hop and of course I missed my tables that you had to learn in 3rd class".

In the 1930s the teachers were Mr Edwards and Miss Frost. The school's numbers remained high during this time. Names such as Etchells, Denison, Longhurst, Porter, Johnson and Hansen being prominent.

On October 2, 1947 the school was destroyed by fire. It started in the early morning and destroyed everything except a store-room. As farms had closed down and the population of East Minto had decreased after World War 2, it was decided not to rebuild. Students were being bused to nearby schools after the fire and eventually they would attend a new school at Minto.

East Minto Public School was located on the corner of Hansens Road and Hereford Place. 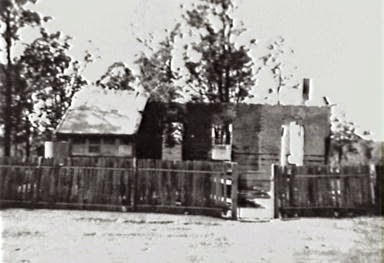 East Minto Public School after the fire that destroyed it in 1947 (A.Denison Collection)