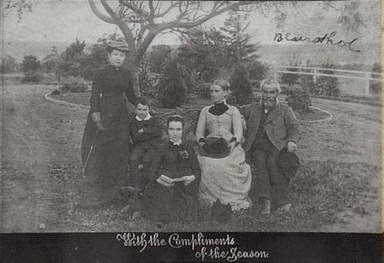 The Kidd family at Blair Athol in the 1890s. John Kidd is on the right. (Photo courtesy Campbelltown and Airds Historical Society).


John Kidd was born at Brechin, in Scotland, in 1838, the son of a shoemaker. At the age of 18 he migrated to Sydney on the Mary Anne and established a bakery. In 1860, three years after arriving in the colony, he married Sophie Collier and moved to Campbelltown. Here he established a bakery and general store which he ran from 1860 to 1876.

John soon developed a reputation for honesty which was to last for the rest of his life. It won him many customers for his businesses and later was enough to be asked to run as a candidate for the Legislative Assembly of the NSW Parliament. He became known as "Honest John" in the Campbelltown community.

John was prominent in the Presbyterian Church and later became an elder. He was also involved in the local School of Arts. In 1870 he was appointed a magistrate and served as a chairman of the local licensing branch. He was a foundation member for the Masonic Lodge in Campbelltown and became the first Patron of the Campbelltown Agricultural Society.

After he returned in 1877 from a trip to Scotland, John took up dairying and began to breed Ayrshire cattle. He bought land at St Andrews and Campbellfields to graze the cattle on and by 1900 was one of the largest rate payers in the municipality. He also planted orchards and vineyards on the land.

John Kidd was elected to the seat of Nepean in 1880. In 1901 he was re-elected to the new seat of Camden until his retirement in 1904. John was a strong supporter of Federation and Free Trade.

He was a member for the steering committee to form a new council for Campbelltown and saw the first council incorporated in 1881. He was also asked by the NSW Premier to be Postmaster General in 1891. Kidd also owned the Campbelltown Herald in 1887.

"Honest John" and his family owned Blair Athol homestead built in 1881. They entertained extensively and their home was one of only very few in the district that had a ballroom. The house still stands in the Campbelltown suburb of the same name.

John continued to supervise his farms after his retirement from parliament in 1904 until his death at 81 years of age. Australia's first Prime Minister Edmund Barton said "I always found him to be a loyal colleague and a strictly upright public man". He died on April 8 1919 and was buried in the Presbyterian Cemetery in Campbelltown. John and Sophie had 4 children: Thomas Collier; Jessie Maud; Mary Elizabeth and Frederick Norman John Kidd.

Pamphlet by A. Robinson of Leumeah High School