He married fellow convict Mary Kable in 1806. Thomas was granted 50 acres of land at Campbelltown on the 20th of June, 1816.
Rudd died on December 15, 1830 and is buried in St Peter’s. His headstone reads that ‘He laft a wife and nine children to lament his loss’. Rudd Road in Leumeah is named after him.
One of his descendants is former Prime Minister Kevin Rudd. Mr Rudd has visited the grave of his ancestor in St Peter's and has a keen interest in his ancestry. He was highly amused that his ancestor was transported out here twice.
Thomas Rudd was featured in the library's tour of St Peter's Cemetery last Wednesday for the 2014 National Trust Heritage Festival. The next tour will be next Thursday May 8 at St John's Catholic Cemetery at Campbelltown. Contact the library for bookings and more information. 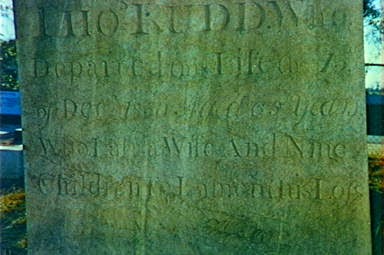