This two storey brick building on the Menangle Road just outside of Menangle on the Campbelltown side was once the Horse and Jockey Inn. It was built in the 1820s. The inn was divided into two sections- one for the lower class and one for the upper. A library was also located on the lower level of the inn but only available for the upper class to use!

George Taber used the building as an inn for some years but then closed it. The advent of the railway opening in the early 1860s caused it to be re-opened with the licence held by a Mr Curtayne. George Taber soon took it over again however.

The building is an impressive example of colonial architecture. It has typical characteristics of the colonial era, the symmetrical arrangement of the doors and windows, shutters, a fanlight above the front door. The cast iron lace verandah is a later embellishment, as is the brick front extension. The extension dates back to 1865.

The inn has been restored to its original form of a bar. The old servery hatch is still there and is the only working one left in Australia.

The sandstone building located to the side of the old inn is the original homestead. This main house was built by George Taber and his convicts in 1834. The external part of it has been restored. It was once surrounded by a magnificent orchard.

Menangle House is featured in an historic photograph display of Menangle created by the Menangle Community Association and displayed at Campbelltown Library for a short time. 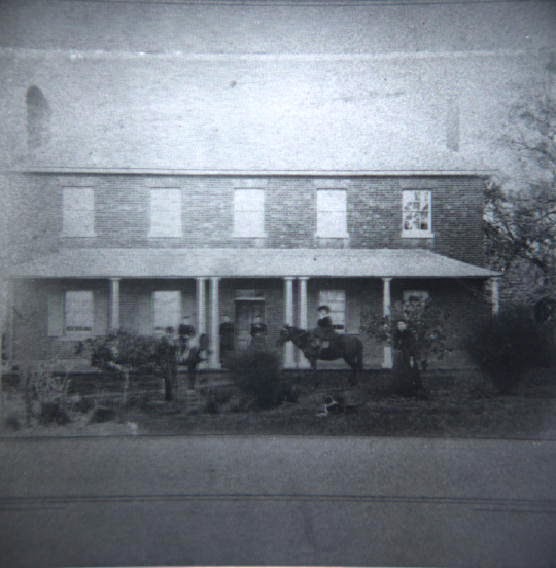 Members of the Taber family outside Menangle House. Date is unknown. (Walker Collection)