A Gift From Our Namesake

Recently I discovered in our tape collection a recording of the ceremony to accept a gift from Campbeltown in Scotland to our Campbelltown Council. The gift was a lamp standard and was placed in a position near the civic hall. The ceremony took place on August 27, 1966 at the civic centre.

The recording contains speeches made by Mayor Clive Tregear, Town Clerk Harley Daley and other dignitaries. Also present at the ceremony was a man named Christopher Swan from Ingleburn who provided a 'Highland welcome by the rich swirling sound of the bagpipes'. The tune he played was the Campbelltown Loch.

In 1961 Alderman Greg Percival, the then mayor, visited Campbeltown in Argyle and they presented him with a coat of arms. An association between the 2 places continued. Campbeltown, on the west coast of Scotland, has been described as one of the prettiest places in Scotland.

The audio cassette of the ceremony is one of a large number of cassettes that will be digitised by the library in the next 12 months and made easily accessible to the public. Our cassette collection contains a large number of oral histories recorded in the 1970s and some in the 1980s. The funds for the digitisation project are through a Community Heritage Grant that the library received last year. 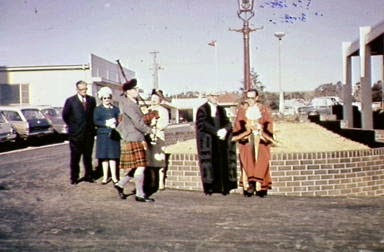 Town Clerk, H.J. Daley and Mayor, Clive Tregear, receiving the Lamp Standard given by Council of the Municipality of Campbelltown, Scotland and installed at the Civic Centre, Campbelltown (Tregear Collection, Campbelltown and Airds Historical Society).