C.J. Marlow was a Campbelltown Council alderman in the early 1900s. He owned a drapery store in Queen Street and was a well known and respected citizen of the town.

Alderman Marlow lived on the Appin Road at Campbelltown. One morning in 1910 as he was making preparations for milking his cows, he was savagely attacked by a bull.  The Campbelltown Herald reported " Rushing at Mr Marlow, the bull caught him between its wide horns and with the unfortunate man pinned and helpless, charged at a tree, and jammed its victim against the trunk. Drawing back a little, the animal made a second rush, Mr Marlow being again crushed against the tree trunk. The length of the bull's horns alone saved Mr Marlow from a fearful death. Retreating a little from the tree, the bull tossed its victim completely over its head, and then commenced pawing at him".

Marlow was at the mercy of the bull when a fox terrier ran up and started barking at it. This distracted the attention of the bull and while it was charging at the dog, Marlow took advantage of the respite to crawl through a gate. Having managed to reach safety, he collapsed.

C.J. Marlow suffered severe injuries but made a full recovery. He later moved to Dulwich Hill and died at Bowral in 1916 aged 65. His son Percy Marlow became mayor of Campbelltown and served three terms.

Apparently the bull had been regarded as a quite animal. It is not known what reward the little fox terrier received for saving C.J.'s life. 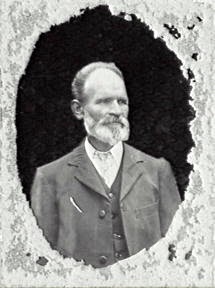 Above is C.J. Marlow shortly before he died in 1916