In the mid 1980s a castle was constructed by Commonwealth Employment Program labour on NSW Housing Department land. It was specially designed as a community project and novel tourist attraction. The castle was built with sandstone and mud bricks. It was located on Rixon's Hill at Ambarvale near the corner of Woodland and Appin Roads. 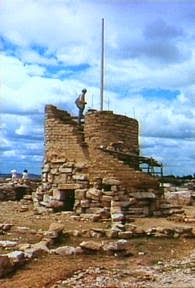 Unfortunately the castle soon became a haven for vandals. Local residents hated it from the time it was first built and regularly lobbied council to have it demolished. One local resident claimed that the crumbling castle provided vandals with a source of stones to pelt neighbouring houses.

Alderman Jim Merry branded the landmark "Folly Castle". It was also known as "Rixon's Folly" or "Rixon Hill Folly". The structure was bulldozed on the 18th of July, 1988.