Many of Campbelltown's important historic events have revolved around one of the town's landmark buildings- the town hall theatre.

The land was originally the site of the Temperance Hall built by James Bocking in 1862 and before this it was owned by George Worrall, the murderer of Frederick Fisher.The original hall had a raised stage with dressing rooms either side and kitchen underneath with lighting provided by kerosene lamps. The local newspaper reported that it was "available to theatrical companies and with piano, for balls, entertainment, etc".

The Temperance Hall was purchased in 1884 by Campbelltown Council and was to be used as a town hall. A fire station was built next door in 1891. Almost immediately it was taken over by Council for the Clerk's Office and the following year a matching facade was added to the town hall. This facade of the fire station and the town hall is decorated in solid late Victorian style, and this is the main character of these buildings.

A free library and reading room functioned from 1886 to 1905 in the area beneath the existing stage. Council meetings took place in one of the upstairs rooms for 60 years up until 1953, when the move was made to the corner of Queen and Lithgow Streets.

One interesting fact about the building is that it was the first in Campbelltown to have electricity connected. This was in 1924 and it apparently bears the official connecting serial number of 1!

Up until 1964 when a new civic centre was constructed, the building was used as a town hall. This included dances, balls and concerts during World War II. Between 1964 and 1979 the building served as the home of the Campbelltown RSL Youth Club. Following this and after renovation in 1979, the theatre group adopted the town hall as its home.

The building has long been associated with numerous ghost stories and the resident ghost is of course named "Fred". Members of the theatre group are certain of Fred's existence and say that he makes "cameo" appearances when there are few people about the place. Lights turning on and off and footsteps after shows are just some of the antics Fred gets up to. 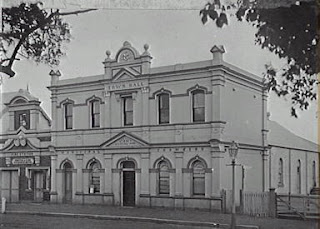 This photograph shows the town hall and fire station taken prior to 1920.