In my interview with local identity Norm Campbell in 2011, he told me a story about the day of his lucky escape as a baby in the 1930s. Norm was in the care of the Meredith family on this day and they were visiting friends at St Elmo. They walked there pushing young Norm in a pram. This house was located at the top of the steep Broughton Street hill in Campbelltown.

The Meredith girl who was taking care of him was distracted for a moment. Suddenly his pram began to charge down the steep, unpathed roadway, gathering speed as Norm swayed and bumped inside. The pram accelerated past Lindesay Street, Moore Street, and Queen Street, finally coming to a halt in long grass near the railway line.

Another local girl named Chris Vardy and her brothers experienced the thrill of hurtling down this same hill during their childhood in the late 1950s. In her Campbelltown Recollections: stories from our past interview, Chris described what is was like to descend the hill at top speed in a home made billy cart made from pram parts. "No helmets, no shoes and just shorts. Straight from the top of St Elmo all the way down to Queen Street. Look out! It was a wonder we weren't killed". 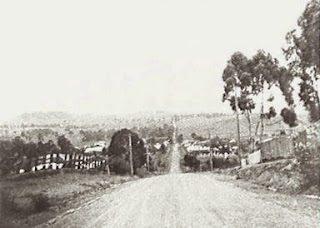 The photograph above is of the notorious Broughton Street hill at St Elmo looking west in 1946. (Campbelltown and Airds Historical Society)
Posted by Andrew Allen at 15:04