Locked away at H.J. Daley Library is an old rail from Fisher's Ghost Bridge that once spanned Fisher's Ghost Creek near Aird's Cottage. The piece of wood has an interesting history.

The rail became famous as the finish post for the Campbelltown Picnic races in the early 1970s. It was famous because in the years that it was used as the finish post the races were repeatedly washed out. It started in 1970 when race promoter, Deirdre O'Dowd, called the main event the Fisher's Ghost Cup.

It seemed "Fred" was unimpressed. The rain came down in torrents and the horses virtually had to swim up the track! The rest of the event had to be cancelled.

The next year the name reverted to the old title of the Campbelltown City Cup and the sun shone brightly. However the next year the meeting was named again after "Fred" and the rail was used as the finish post. It was compltely washed out and three other meetings that followed were as well.

Deirdre brought the post back to her house and stored it in the garage. Within six months she received an excess water bill for a half a million gallons of water, due to leaking pipes!

I use the "ghost post" for the occasional display and school tour. Yes, it almost always rains on the day it's brought out of storage. A sure way to break any drought! 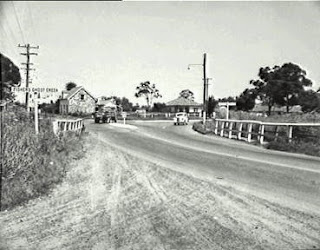