Skeleton in the Creek

It's Friday the 18th of June 1920 and Alexander Crowe, a World War One digger, is chopping wood on his farm at the Soldier Settlement near Campbelltown. Crowe's block was on the far eastern boundary of the settlement with a creek running through the rugged portion. As he was chopping wood he saw a curved shape bone lying on the ground. After curiously scouting the ground in the vicinity and much to his horror, found a human skeleton partially dressed in men's clothing lying in the dry creek bed. The police were immediately notified and they began to identify the skeleton.

Initial newspaper reports before identification described the scene. They wrote that the nature of the bones indicated that the man was in the prime of his life when he died. They theorised that the man could have stumbled over the bank of the creek and lain there without attracting assistance. The right knee was dislocated it was also noticed.

Early reports also suggested that the body had been there for around 12 months. Also in the creek bed were six bottles of vanilla essence, three pennies and four half pennies plus some cordial bottles. Police however initially had little to go on to identify the body.

Dr Mawson of Campbelltown then examined the remains. He was of the opinion that they were lying exposed for at least six months, and were those of a young man between 5ft 9in and 5ft 10in high. Several bones were missing and the doctor believed that they were taken by wild dogs.

News of the discovery reached Victor Thompson of Parramatta. He was quickly on the scene and was convinced that the skeleton was of his father Nathaniel.

Sixty year old Nathaniel Thompson lived in Landers Street, Redfern and worked as a cordial maker. He had recently lost a son and was greatly affected by this. One day in February that year he had set out to visit his mother's grave in Liverpool. Before he had left the family gave him three pennies and four half-pennies to take with him. Being a great walker he had decided to walk the journey but became lost as night approached. The Campbelltown Herald went on to explain that "the place where the deceased was found would give every reason to believe that an accident happened, and the death was due to exposure". Further adding support to the son's belief that this was his father was a distinctive broken tooth and a newly soled boot.

This was all I could locate on this story. I find it strange that Nathaniel Thompson would stray as far as the Soldier Settlement at Campbelltown on his way from Redfern to Liverpool. 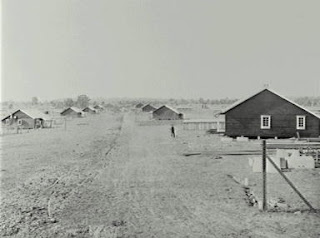