The Presbyterian Cemetery was originally a gift made to St. David's Presbyterian Church by Alexander McDonald, most likely in the 1830s. The deaths of his two children Jane and William are the earliest deaths shown on a monument in the cemetery. Alexander's own death was in 1847.

There are 177 monuments in the cemetery recording the deaths of about 326 persons. The cemetery has some notable Campbelltown names that rest there. These include:

John Kidd- owner of Blair Athol. He was an MLA for Camden in the late nineteenth and early twentieth centuries.

Percy Marlow- member of Campbelltown Council from 1926-56 including mayor for 3 separate terms.

In 1987 that portion of the cemetery lying adjacent to Moore Street was resumed to allow for widening of the road to become the Moore-Oxley Bypass. The Department of Main Roads compiled a register of all persons buried in the affected area and contacted those descendants who were able to be located. In March 1987, graves and/or memorial stones were moved to other locations within the cemetery or other cemeteries. 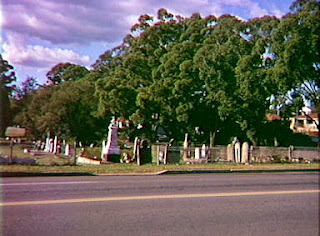