I was recently contacted by a researcher investigating the life of Australia’s first major league baseball player, Joseph J. Quinn.  Quinn is something of a forgotten hero in Australian sport – he played 17 seasons in the American major leagues between 1884 and 1901, mostly as a second baseman, and he was so popular with the American public that he was voted “Most Popular Ballplayer” in 1893!  It was 102 years before another Australian was drafted into a major league team, which may explain the lack of research and recognition of Quinn’s achievements in the land of his birth, although he was inducted into the Australian Baseball Hall of Fame in May this year.


Most of Joe Quinn’s childhood was spent in the Campbelltown area before he immigrated to the United States with his parents and older brother at the age of 11 in 1872.  He was actually born in North Ipswich, QLD, in 1862, to Patrick and Catherine Quinn, but the family are thought to have moved to Campbelltown around 1866 due to the severe drought and subsequent high levels of unemployment in Queensland.


But the Quinns’ lives in Campbelltown between 1866 and 1872 are a bit of a mystery.  Joe’s father was an illiterate labourer with a history of finding work wherever he could get it during his travels around Australia – he had previously worked as a farmer, miner, and railway navvie.  The Quinns were Irish Roman Catholics and it may be that both Joe and his older brother Patrick jnr. attended St. Patrick’s school on the Old Menangle Road.  But there are very few employment or education records from this period – can anyone shed any light on this family and their lives?


It is anticipated a book about Quinn’s life will be released later this year – details to come. 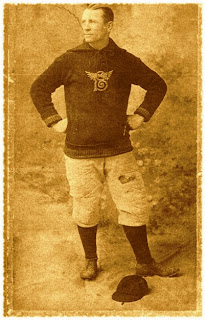 This photograph of Joe Quinn was taken in 1890 in Boston
Posted by Andrew Allen at 10:57