Kenny Hill was the name given to the rise out of Campbelltown near today's Narellan Road heading towards Narellan and Camden. It was named after Dr William Kenny, an early doctor in Campbelltown.

The hill is best known to locals as the steep gradient that 'Pansy', the steam train that once ran on the Campbelltown-Camden line, had to confront regularly. It was once written that "Any day of the week one may see the "tram" panting and puffing, emitting clouds of angry smoke up the preposterously steep grade of Kenny Hill. Sometimes it fails to make the grade. On those occasions it retreats in rage and humiliation to take another run at the hated lines."

The gradient was the steepest used by adhesion locomotives in Australia. Due to the steepness of the gradient of 1 in 19 between Campbelltown and Kenny Hill, there were often multiple attempts made at ascending the grade. It resulted in passengers disembarking from the train and walking alongside it, leaving their bags on board. Often the train would reverse back down the hill, stoke the engine up, and have another try! When trains could not successfully ascend the hill, the train would be divided and the second half of the train (usually where the passengers were carried) would be left standing on the line until the first half of the train had been stowed at Campbellltown. These delays were a source of annoyance and inconvenience for passengers. The ascent was made harder when it rained as the train found it harder to get traction.

Kenny Hill was the second station on the line after leaving Campbelltown. It was a station with a simple platform with no shelter. Trains only stopped there if the driver was notified that passengers needed to stop. The station was located just to the west of the water canal near Narellan Road. Those with a sharp eye can make out the remains of the old line at Kenny Hill cut into the embankment adjacent to Narellan Road. 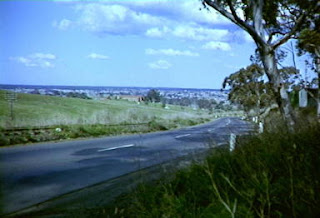 This is an interesting image taken on 15 September, 1963. It shows Narellan Road at Kenny Hill with the train line very close to the road. This shot was taken just nine months after the last train ran on the line. (Hugh Bairnsfather Collection).