Opened in 1863, Menangle Viaduct is the oldest railway bridge in New South Wales. It is an excellent example of early bridge construction.

The bridge was designed by John Fowler. Messrs. Peto, Brassey and Betts were successful in tendering for construction of both the railway line from Campbelltown to Picton and the viaduct. After a great flood occurred in 1860 during the finalising of its design, the bridge was lifted over six feet to provide sufficient clearance for floodwaters.

During its construction, about 500 people (construction gangs and their families) lived in tents and small huts nearby.

The sandstone for the piers was quarried about 1 and a half miles upstream and transported by temporary tramway. The ironwork was fabricated at Birkenhead in the UK and loaded on to two vessels which sailed in 1861.

The bridge is one of two identical bridges constructed for the NSW Railways, the other being over the Nepean River at Penrith. The Penrith bridge was opened in 1867 but has been used for road traffic since 1907.

In 1976 some wagons of a goods train were derailed on the northern approach and came into violent collision with the ornamental masonry piers at that end. They were so severely damaged that they were demolished from above the rail level and have not been replaced.

Last Monday the 12th of August, a presentation was made to acknowledge the 150th anniversary of the opening of the bridge. 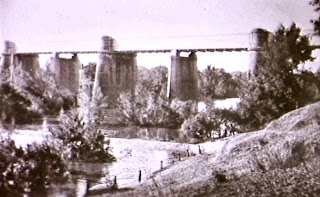