Charles Alexander Nicol, known affectionately as Charley Nicol, was born in Campbelltown in 1884. He was the son of George and Martha Nicol. During his youth he worked with his brothers on the family farm at Appin Road. Being a teamster, his father was often away and the boys needed to run the farm in his absence.

Being one of 14 children he soon found he would have to move out and fend for himself. He had some years of working for wages before going into business. This was at first a sawmill at Appin but later he went to Campbelltown where he opened a timber yard in Iolanthe Street. Soon after starting his timber business, he became the local undertaker and used his timber in making the coffins. He kept his empty coffins in the roof of a large shed at the rear of Iolanthe Street. Charley also dug the graves at the cemeteries and filled them after the funeral. He was well known in the Campbelltown community for his caring and sympathetic nature and for the comforting words to the deceased's relatives and friends.

According to local identity Norm Campbell, Charley was adamant that Frederick Fisher was buried close to the corner of Howe and Broughton Street in St Peter's Cemetery. This was against the most people's belief that it was more towards the bowling green corner.

Charley was a real character of Campbelltown. He could be regularly seen in the company of local barber Mort Clissold. If you wanted any information to do with the town you would call in and catch up on all the gossip from the pair.

Charley was also a builder and constructed many of the timber buildings in King, Iolanthe, Warby and Chamberlain Streets. He was a keen cricketer and lawn bowler. Charley also owned the land where rugby league was played and the ground was often known as "Charley Nicol's Paddock".

Another of his interests was motorcycling. In his younger days he was one of the first in Campbelltown to own one of the "boneshakers" as they were known at the time.

In 1920 he was elected as an alderman on Campbelltown City Council and served several terms on council.

Charles Nicol died on May 30, 1969 aged 85 and is buried in St Peter's Cemetery. His grave can be seen in the photograph below. I wonder did he catch up with Fred Fisher to confirm if he was correct or not! 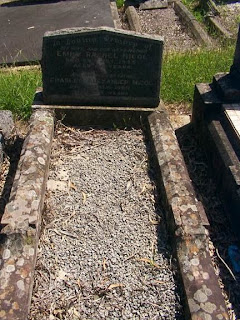