In the small hours of February 8, 1898 four Campbelltown men were charged and gaoled for a heinous crime: eating another man's peaches from his tree!

Daniel Dwyer, Patrick Meredith, Michael Daly, Daniel Daly, and Alfred Brown were brought up charged with having been found in the enclosed garden of William Gee for an unlawful purpose. The case was withdrawn against Brown and he was used as a crown witness. The rest pleaded not guilty except Meredith.

William Gee had suspected that his orchard was being raided in the early mornings and had arranged with police to catch the culprits in the act. At about 1.45am on the 8th of February Gee, armed with a gun, and Constable Auckett waited for the orchard raiders to appear. A quarter of an hour later 5 men jumped the fence and commenced to pull the peaches from the tree. Gee called upon them to stand or else he would shoot but instead of obeying him after Gee did fire his gun, they ran away and climed back over the fence. Meredith however was caught by Gee and detained until Auckett joined him and was taken to custody. The other 4 were arrested at their residences.

At the court hearing Alfred Brown swore to Meredith and Dwyer being in the garden but would not swear to the others. Daniel Dwyer gave evidence on his own behalf. He admitted being one of the group, but denied entering the garden. None of the other accused wished to give evidence.

The Bench considered the offence proved, and sentenced the four accused to one month's imprisonment in Parramatta Gaol. 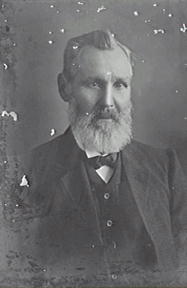 Above is a photograph of William Gee taken in 1912