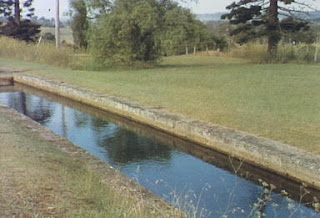 The Upper Canal photographed in the 1980s (Macarthur Development Board)

You may have noticed when driving along Narellan Road heading towards Mount Annan a long drain type structure. This is actually a canal or water race known as the Upper Canal. It is a system of aqueducts, tunnels and open canals which enable water diverted through the Nepean Tunnel to flow a distance of 64kms to the major distribution reservoir at Prospect. The canal runs along the western boundary of the Campbelltown Local Government Area.

Construction of the canal was carried out from 1880 and completed in 1888. It relies on gravity to divert water, so it was a remarkable feat of the time and functions today much as it did more than 100 years ago.

The canal is 3.7 metres wide and 2.5 metres deep and relies on natural sandstone bedding, lined where necessary with sandstone rubble or cement, and with brick in the shale country nearer Campbelltown.

Campbelltown welcomed the building of the canal in the 1880s as it provided employment for local men and income for shopkeepers, carriers and tradespeople. It also added to the town's population. Another benefit was to the town's water supply. It was the first town to receive water from the system.

According to former Campbelltown resident and St Gregory's College student Ted Sedgwick the water race claimed the lives of a number of students from the college. (see update below) Attracted by the prospect of a refreshing swim on a sweltering day the victims underestimated the freezing temperatures of the water and tragically drowned in the canal. Mr Sedgwick also remembered how the canal became a potential threat during the Second World War. Authorities were concerned that the water supply could be sabotaged by the enemy. This lead to mounted guards patrolling the canal for a period of time.

The canal is still in use today. There have been threats over the years to the structure, particularly from longwall mining near Appin. It has local heritage listing and is classified by the National Trust (NSW).

*Update: Further research has revealed the names of the people drowned in the water race. Harry Miggins was drowned in it in 1948 and Graeme Cook from Randwick in 1958. Another person was saved, the wife of the racekeeper, who overbalanced into the water and was found by a day student clinging to a crack in the wall, a short distance from the inlet to the tunnel.

AIRD, W.V
The Water Supply, Sewerage and Drainage of Sydney, 1961