Think Narellan road is a pain? Early last century, a night trip to Camden meant waking up Mrs Mortimer so that the gate might be opened for you to cross the railway track.
In the days of sulkies, drays and even into the 1930’s and the era of the motor car, both the North and South ends of Campbelltown were barred by gates in order to regulate road and rail traffic.
Gatekeeper George Morgan attended the North Gate, with his ‘old walking stick and a cheery goodnight to those going or coming.’ The crossing was a well-known black spot to locals. A newspaper article of 1926, entitled ‘Morgan’s Gates Again’ reports that the driver of a Hudson Motor car travelling along Queen Street failed to see the closed gates until it was too late, ploughing through Mr Morgan’s fence and into his garden. The occupants suffered no injuries.
Tragically, Irene Ruby Orontess Scattergood was not so lucky dying in an accident at the gate in 1925.﻿﻿ 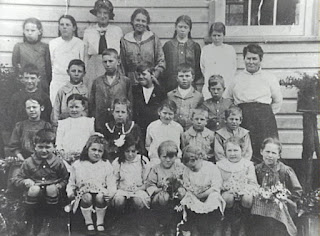 Irene Scattergood in the back row on the left at Campbelltown South Public School c 1917.
Photo: McMahon Collection
It was this accident that began the crusade of the Local Member of State Parliament Mr Andrew Lysaght. He requested the Main Roads Board and the railway department construct an overbridge. ‘There is no money’ came the answer.  Mr Lysaght had a big say in the Lang Government and so with additional labour from council workers the original Morgan’s gate overbridge was opened for traffic on the 7th March 1930. 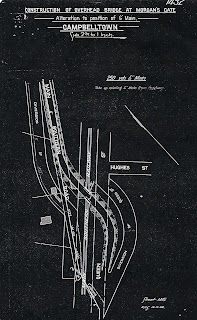 Plan of the proposed overbridge 1926

Mortimer’s gate had not quite so many accidents. It was tended by H Mortimer and after his death his wife Emma. A ‘blanket around her shoulders’ on cold days, she helped travellers on their way until her death in 1923 aged 58.
Afterwards the job went to the railways. A gatekeeper’s box stood by the gate with a coal stove to keep them warm in winter. Connected by telephone to the signal box at Campbelltown station three men maintained three shifts around the clock.  James Ashford worked with two one armed men,  Joe McGarrity who could still hold a cigarette with his stump and Hilton Charles Rumery, victim of a shunting accident.