Imagine the horror the driver of a train from Sydney felt one night in May of 1928 when he came across the decapitated body on the line near Ingleburn. News reports described how the driver stopped the train, walked back along the line, and found the dead man's head lying some distance away from the body. After informing the stationmaster at Ingleburn of his discovery the Campbelltown police were sent for and the body removed to the morgue.

It was believed that the man deliberately put his head on the line in front of the train. There were no marks on his clothing and no papers to identify him. A portion of the lining of his hat, supposed to have been described with his initials, was torn out apparently to prevent identification.

The man was dressed in a dark blue suit, black patent boots and a grey hat. He was aged about 25. 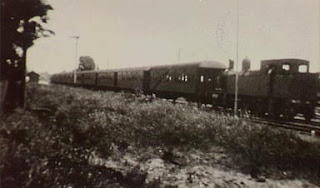