The name John Charles Rider would not be familiar to most Campbelltown people yet his skills in glass decorating in the late 1800s and early 1900s won him the admiration from people around the country. Examples of his delicate crystal engravings are now highly sought after by collectors.

Born in Stourbridge, Worcestershire, England, in 1850, Rider was apprenticed to glass manufacturers Thomas Webb and Sons at the age of 14. Rider settled in Sydney when the firm decided to open branches in Australia. After occupying various premises in the city, Rider moved with his wife and son Fred to Minto in 1896. He continued to work in the city however and was assisted by his son. It is assumed that Rider commuted by train daily to the city since it would have incurred too great a risk transporting glass engraved at home to clients in the city.

Rider's method of glass decorating was carried out with a mixture of oil and fine abrasive powder. He was known to have used etching as a support for his engraving. His subjects were said to have displayed movement and strength and were more scenic than the works of his original masters, Thomas Webb and Sons. Often the tumblers he worked on were of thin and delicate metal and light in weight. His touch was equally as light and delicate.

Some examples of his creations that won him much praise were an engraved glass with arms of the colony of NSW and an engraved bucket-shaped tumbler featuring a group of 3 aborigines spearing a possum in a gum tree. 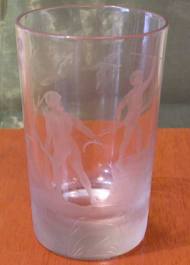 An example of Rider's engraving on a glass.


John moved with his wife and son to Condamine Street in Campbelltown just before he died aged 82 on 18 July 1934. He was buried at St Peter's Cemetery. Interestingly, the Campbelltown News carried no obituary notice. Fred did not follow his father's trade and took up farming in Minto before his move to Condamine Street. He died in 1951.

Are you fortunate enough to possess a Rider engraving? Please let us know. 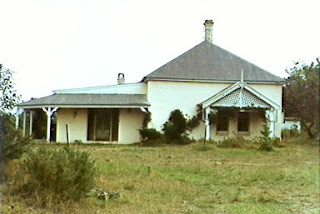