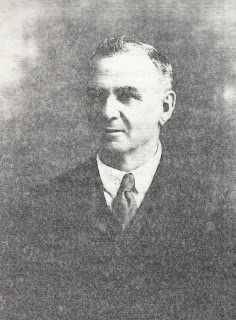 George Craft was a leading citizen of Ingleburn and was to the fore in most community activities. He was also one of its most memorable characters. A stockrider, saddler, bootmaker, sports fanatic, blue cattle dog breeder and poet, George Craft was what you might term a great all rounder. It was through his breeding and showing of ducks however that people remember him most and earned him the title of the Duck King.

George Edward Oscar Craft was born at the Robin Hood Inn on Bunbury Creek near Campbelltown on 14th October, 1869. The Robin Hood Inn was one of the early inns in the area but is long gone. George's parents were William Craft and Jane Maria Bolger. William and Jane and their children left Campbelltown in 1872 and travelled to Bundaberg in Queensland. They settled at a small place called Gin Gin.

George spent his boyhood years at Gin Gin and grew up to be a stockrider. Horse riding was something that he excelled at. His stockriding life was cut short however, after an accident in 1886 at Mt Perry when his horse fell and rolled on him, resulting in multiple fractures of his left leg. Expert medical attention was not available in Bundaberg but a Sydney bound boat was in port, so his mother and two younger sisters accompanied him to Sydney.

George's leg was saved, although he was to have a limp thereafter. He did not return to Queensland but stayed at Campbelltown where, at the age of 23, he married a cousin, Edith Annie Bolger. They had two daughters.

George was particularly interested in sports and became known as "the daddy of sports in the Ingleburn District". Women's athletics had a special interest for him and he trained and promoted Miss Bessie Grandemange in match races.

Poetry became another of his passions. Dreams of his boyhood days in Queensland were never far away and, as the years passed, G.E.O. as he became known, took more and more to expressing his memories and dreams in prose and verse. Some of these were sent to Bundaberg where they were published in the "Bundaberg Daily News". Other pieces appeared in the "Campbelltown News". Below is one of his poems with the title of  Gents (Also on Roller Skating at Ingleburn in 1913).

Long Charlie L. skidded and fell,
In this way made collision.
He struck the floor,
Flew out the door,
Competing in his division.

There's Lennie from Bunbury Creek,
Who often makes a blunder.
The floor he hits,
Up he sits
To star-gaze around in wonder.

Liverpool boys, they make some noise,
At times a little too rough.
Though well they know
It's time to go
When the M.C. raises his cuff.

Lady and Gent, surely content
With what goes on at the Rink;
E.C.'s coffee,
Chocks, toffee,
And other nice treats and soft drink.

It was, however, his knowledge of ducks that Ingleburn locals remember most. George had a barber shop in Ingleburn as well as his saddlery. It was at the back of the barber shop that he had his ducks. One old identity remembers "Out the back he had his duck farm. He was a character of a fellow. He had his multi-purpose shop with saddles, stirrups and boots and things like that and next door he had a barber shop. I used to go down there as a child to have my hair cut. He would come in with a grey flannel singlet and waist coat all covered with pollen from where he had been feeding the ducks." He goes on "George was usually seen in his old dirty clothes with chook feed all over them. He bred ducks and even had a duck named after him called the Inglecraft Duck. I remember once I was either going to school or university and here turns up this fellow with a cane, bowler hat and spats. Blow me down, it was George Craft. He was going to the Royal Show in Sydney to judge the ducks."

Another local had a funny story about George. "as a youth, George told me that one could grow new hair on old scars of horses by applying a mixture of black sulphur and lard. I have grown new richly coloured hair on new fire brands of horses with this mixture. It occurred to me many years later that I may be able to grow hair on my thinning scalp. So I made up the dreadful concoction and spent a horrible weekend plastered with hot black fat running down my face. It wasn't until the last day that I remembered that George had said it didn't work on bald headed men!"

The Verse of George E.O. Craft