Every family's worst nightmare came true for two sets of Campbelltown families one day in the Spring of 1926. Elsie Egelton and Lydia Scattergood went into the bush at Wedderburn to gather wildflowers. Elsie was aged 24 and Lydia about 13. At about 4 o'clock they found themselves lost in the wild, rough and rugged country and were unable to find their way home. Night fell and they were faced with spending a night in the bush.

Meanwhile their parents became worried and went into the bush to search for them. Unable to locate them, they contacted the police. Two policeman organized about 30 volunteers to help in the search.

A noted tracker and expert bushman named Mick Rixon found fresh tracks around 10pm and half an hour later they heard a cooee from down in the gully. The girls were found about an hour later, over 15 kilometres from their homes.

They made slow progress back as the girls were exhausted and nervous and by 1.30am could go no further because of their sore and swollen feet. The men lit a fire and the group rested until just before dawn when they again made out for home. By 6.30am the girls were back at their homes to the relief of their families. The outcome could've been far worse if not for the skills of Mick Rixon. 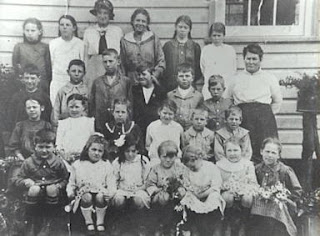 School children at Campbelltown South Public School c 1917-18. Lydia Scattergood is the girl in the front row with her head down.