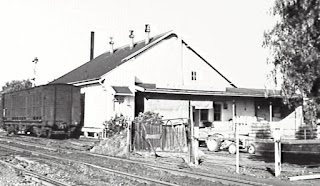 In 1922 a new milk depot was proposed for the town of Campbelltown. There were about 68 dairies in the district and 45 of these dairies were interested in taking shares in a cooperative factory built in Badgally Road (then called Broughton Road) adjoining the railway crossing. Dairy Farmers Cooperative Milk Co opened the milk depot in 1923 at a cost of 6000 pounds.

In its hey-day, the depot received milk from 70 suppliers in the Campbelltown, Minto and Appin areas, to be chilled and transported in tankers by the "Milk Pot" train to Sydney. This train started from Moss Vale and picked up the Camden Depot milk freight and Campbelltown Depot milk, leaving Campbelltown at 11.45am.

Farmers delivered their milk to the factory in cans, which were scalded and steam-cleaned before they were returned to farms. The suppliers had to run the gauntlet of the various tests. There was a "blue" test, a sediment test for dirt as well as the butter fat test, all conducted locally. Failure of these tests would result in a "block" for a stipulated period.

The Milk Depot was also used for ice-making. This was an important activity for use in the household ice-chest, before the days of the refrigerator. The rectangular blocks of ice were delivered by the milkman.

On the 16th November, 1967 the Milk Depot closed after 44 years. Local dairying had dwindled with increasing urbanization and the impact of bulk pick-up had drastically reduced the need for the depot. Campbelltown supplier's milk was then taken to the Camden depot until a new depot was built in the industrial area off Rose Street a year later.

The depot building had been deteriorating for some years and was on railway land. The building became unused after the closure and was earmarked for demolition. Then on the 5th April, 1969 a spectacular early morning fire destroyed a portion of the building. The entire building was demolished the next day.