Last Thursday Campbelltown hosted the launch of local author and historian Lauren Holkin's book ANZACS Of Macarthur: The Men and Women Who Served in The First World War. Lauren included in her talk brief stories of a number of local men who served in the war. One soldier that interested me was Harold Edward Ashcroft Fowler, better known as 'Lofty'. His height of 6 foot 3 giving him his nickname.

Lofty was born and raised in Campbelltown to Alfred and Lydia Fowler. He was working as a builder before answering the call and joining the AIF. Lofty was posted to No. 1 Machine Gun Regiment which departed Melbourne onboard the HMAT Port Lincoln on 20th of October 1916. After spending a year preparing for conditions on the Western Front, Lofty and his comrades left for France in December 1917 and upon arrival was marched out to the 23rd Machine Gun Company in Belgium.

For a few months he experienced intense fighting with the Germans as a machine gunner. Then on the 13th of July, Lofty was eating breakfast on the parapet about 10.30am, when suddenly a shell came over and hit the trench. Lofty was badly hurt with multiple injuries, including a severely damaged leg and arm. Unfortunately his leg had to be amputated followed by his arm a fortnight later. Lofty died from his wounds and shock at 9pm on the 26th of July- 98 years ago to the day.

Harold 'Lofty' Fowler is buried at Crouy British Cemetery, Crouy St. Pierre, near Amiens. His name is recorded on a plaque at Dredge's Cottage in Campbelltown.

Lauren's book is available at HJ Daley Library as well as each of our three branches. It's a valuable resource with thorough research and I recommend you check it out. 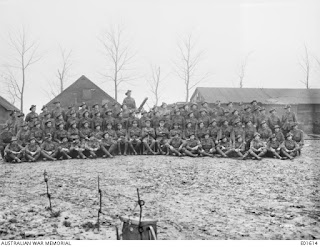 'Lofty' Fowler can be seen in the back row, 3rd from the left. (Australian War Memorial).
Posted by Andrew Allen at 15:29