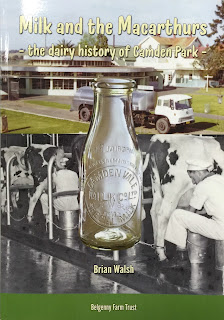 We have recently had a generous donation of a book to Local Studies from the Belgenny Farm Trust, called "Milk and the Macarthurs - the dairy history of Camden Park" by Brian Walsh. This book details the history of the dairy industry at Camden Park, from the initial land grants to John Macarthur through to the present day. I decided to write a little about the Rotolactor at Camden Park, because, as a kid, like many others, I can remember visiting it on a school excursion! The main memories are of milkshakes and the very strong smell of cow!
The Rotolactor was first developed and built in New Jersey, U.S.A., in the 1920s, and in the 1940s Lieutenant Edward Macarthur-Onslow, a descendant of John and Elizabeth Macarthur, inspected it on a business trip to the United States. Keen to keep abreast of modern trends, Edward returned to Australia and commissioned the building of a rotolactor at Camden Park. Plans were drawn up locally and the foundation stone laid in 1950. The building was completed in 1952, the first of it's kind in Australia.
Effectively, the rotolactor was a circular automated milking machine, with a circular rotating platform, with 50 cow bails. It was built of brick and stainless steel, with walls of glass to let in natural light, and lights for night milking. As the cows circulated on the milking machine they were fed on feed from the neighbouring irrigated Cowpasture Flats. It took 7 minutes to milk each cow, and every hour between 300 and 375 cows could be milked. Cows would complete a full circuit, and left the rotolactor at the same point as they entered via a different race. The cows were split into groups according to their milk production levels. There were three different speeds to accommodate high, average and low milk producers. A small staff of 9 or 10 could operate the process.
During the 50s and 60s up to 2,000 visitors a week travelled to Menangle to see the rotolactor in action!


Operated by the Macarthur family until 1973, the rotolactor was sold and went through a few owners until it finally closed in about 1983.
These days, modern rotary dairies use a simpler platform and fewer staff. The Menangle Rotolactor was the forerunner that pioneered the use of rotary dairies in Australia.

Written by Claire Lynch
Sources:
Milk and the Macarthurs - the dairy history of Camden Park by Brian Walsh, Belgenny Farm Trust 2016
www.camdenparkhouse.com.au/rotolactor.htm
menangle.com.au
A Scrapbook of history: stories of the Macarthur District by Marie Holmes, CAHS 2012