The lower western end of Dumaresq Street was once affectionately known as 'Sewer Lane'. Many years ago, a creek ran down from the Cattle Tank and reservoir in Allman Street. It would meander past the Methodist Church, run down to Oxley Street and come out in Dumaresq Street, into stormwater drains that Council built, and would finish up going underneath the road. The water was then drained away in a large open canal on the northern side of Dumaresq Street between Queen Street and the railway line. In Campbelltown's early days, a corduroy bridge ran over this same creek in the vicinity of the entrance to the car park on the northern side of Dumaresq Street, between Moore-Oxley Bypass and Queen Street. This is the creek some believe flowed under a bridge that John Farley once sat on when he claimed to have seen the ghost of Fred Fisher. A 1918 parish map shows the section between Queen Street and the railway line as Kidd Lane, named for the Hon. John Kidd, M.L.A. who once owned Blair Athol House.

The town's older residents remember Sewer Lane fondly. "When we were kids we used to crawl through all the stormwater pipes down Dumaresq Street, which we used to call Sewer Lane" said one. "There was a big gutter running down to the railway line and we used to make little boats out of paper and sail them down there from Queen Street to the railway line. They called it Sewer Lane as it was a big open drain all the way to a creek at the railway line." The drain had wooden bridges over it. Another lifelong resident remembers its size: "It used to come down Dumaresq Street and kick across, it was huge. When it was full on rain, man that was something to watch! Yes, an incredible amount of water used to go through it." Another local, Bob Moore remembers "We would often walk down Dumaresq Street, under the roadway during storms, which was then known as Sewer Lane, and wade through the stormwater just for the fun of it."

Although it was referred to as 'Sewer Lane' the water was stormwater as there was no sewerage until many later years. In 1986 Council excavated the old water race at the intersection of Queen and Dumaresq Street and replaced it with new pipes and culverts. 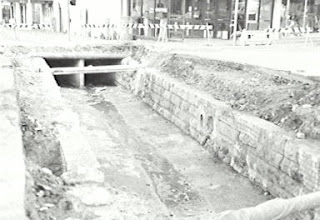 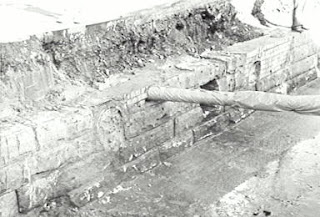 Detail of the stone wall during the 1986 excavations
Posted by Andrew Allen at 15:20