Survival, storms and a happy ending


The following morning, Betsy was finally produced. Unbelievably, Alexander Berry knew Betsy, having taken her and her family from Norfolk Island in 1808 back to Sydney from Norfolk Island via Van Diemens Land. Betsy was emaciated, and her skin was raw, after spending about 3 weeks with the natives. She was however, clean, dressed in the linen shirt of the captain, and had her hair combed and decorated with a white feather. Berry took all the survivors back to his ship. Fortunately he had had medical training at Edinburgh University, and was able to care for them all. In January 1810, the “City of Edinburgh” set sail from New Zealand for the Cape of Good Hope, via Cape Horn.


In mid-February, whilst near Cape Horn, the ship encountered a fearful storm, which blew the sails to pieces and knocked the rudder away. More difficulties followed, with further gales and scarcity of food. Finally after 5 months since leaving New Zealand they limped into Valparaiso, and were able to have some repairs made, and then headed north to Lima, Peru, where they were to remain for ten months. Berry felt responsible for making sure Betsy was being looked after, so he made arrangements for her to stay in a respectable house with a Spanish couple. There she was accepted with love and affection, indeed, the couple did not wish to give her up, nor did she wish to be separated from them. Had Berry not been a friend of William Broughton he may have left her there.


Instead, they headed for Rio de Janeiro, arriving in December 1811, where Berry was able to secure passage for Betsy to Port Jackson aboard the whaler “Atlanta”.


Meanwhile, William Broughton, who had received word of the demise of his common law wife, had married Elizabeth Charlotte Simpson, and been granted 1000 acres at Appin, which he named “Lachlan Vale”. Elizabeth took on William’s children, and brought with her a son. Little Betsy was returned to her father, finally reunited with him in March 1812, almost 2 and a half years after she left Port Jackson with her mother. He was so delighted, he had her portrait painted and sent to the kind Spanish couple who had cared for her in Lima. (This portrait would surface 150 years later in a second hand shop in England, with a letter from William Broughton concealed inside.)


At seventeen, Betsy married Charles Throsby, nephew and heir of Dr Charles Throsby. By all accounts, and despite the trauma she endured as a child, she had grown into a charming young woman, and went on to live a long life. She and Charles moved to Moss Vale, and built Throsby Park. They had 17 children. Charles died in 1854, leaving Elizabeth a widow at 48. Elizabeth lived at Throsby Park until she passed away in 1891, at the age of 84. She was a highly respected member of the community, and well known throughout the colony. 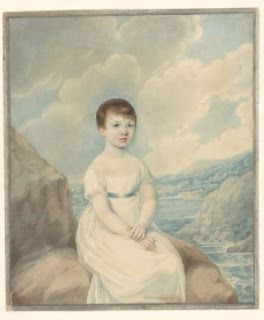 
William Broughton and the Kennedy Connection by Margaret Carty