Lost but not forgotten...


During the era of silent films, Raymond Longford, a prolific director, writer, actor and producer, and Lottie Lyell, regarded as Australia’s first film star, formed a production company. (Longford had directed  “The Sentimental Bloke”,  generally considered to be the finest silent Australian film.)  In May 1922, Longford-Lyell Australian Productions was launched, with initial capital of 50,000 pounds. Sadly, the backers of the company did not wish to remain in production, and liquidated the company, but Longford and Lyell persisted as independents with Longford-Lyell Productions. The first film made by the new company was “Fisher’s Ghost”!! Made in 1924 on a budget of 1000 pounds, the film was rejected by the Australasian Films-Union Theatres combine, on the basis it was “too gruesome”, and so Longford sold it outright to Hoyts for 30 pounds for a one week season.  It was belatedly released in October 1924, with the magazine “Everyone’s – Incorporating Australian Variety and Show World” saying of the film – “we desire to point out that, having in view the limited capital at the disposal of the producer, we have every cause to congratulate him on having made a most entertaining story out of one of the most astounding tragedies in the history of Australia”. The film was also shown in England and Scotland, to great acclaim.
Sadly, despite much searching and investigation, from Australia, to Britain, to America, no copy of the film “Fisher’s Ghost” has ever been found. How wonderful it would be if a copy were to finally come to light! 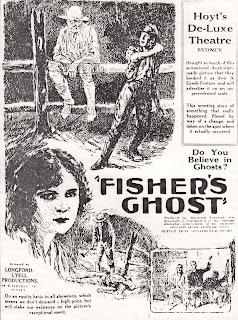