In 1963 Bill Anderson (33 stone or 210 kilograms) and Les Miller (18 stone or 114 kilograms)- total 314 kilograms or 50 stone- of Campbelltown Bowling Club threw out a challenge in the journal Bowls to any pair weighing 50 stone or more. The only takers were two Nyngan men, Noel Trotman (8 stone or 51 kilograms) and his father (7 stone or 45 kilograms)! The match was promoted as The Campbelltown Giants versus The Nyngan Mouses.

The match took place in Campbelltown on January 25, 1964. Everyone was in stitches when the weighing took place before the game. A large wooden beam was set up as a balance in the form of a type of sea-saw. Of course the two tiny Nyngan men headed straight for the sky as soon as Bill and Les plonked their considerable frames on the other end. Adding to the hilarious moment, nine other bowlers were added to the Nyngan side to weigh up the balance. The Campbelltown-Ingleburn News explained that Vince Tripp tipped the balance as he was the foundation "stone" of the club!

The match commenced to the whirring of many cameras, TV and local enthusiasts having a busy time getting the best angles of the match. Members were delighted to see themselves on television during high tea. The city press and television gave the game a wide coverage (imagine TV networks bothering to cover such an event these days).

For the record the Nyngan Mouses beat the Giants 27 to 12. 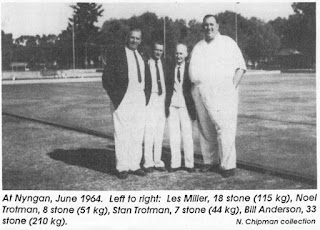