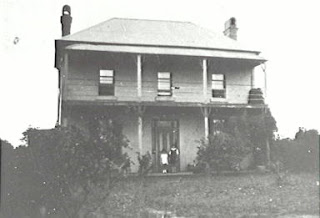 Rosslyn in the 1920s or 1930s (Campbelltown and Airds Historical Society)

If you've driven along Badgally Road recently you would've noticed work being carried out on the Claymore Urban Renewal project. There was once a two storey homestead that occupied a site where this work is going on. The house and farm was called 'Rosslyn' which later became 'Claymore' and which gave the suburb that it is now part of its name.

Samuel Humphreys purchased two lots of land from William Fowler in 1882. This was the land where Rosslyn house stood. After Samuel and his wife Jemima died, the mortgage payments on the property weren't being made and the Savings Bank of NSW took it over. The bank then sold it to Samuel Bursill Senior who sold it to his son Samuel Bursill Junior in 1920. It was the Bursill family who then named it 'Rosslyn'. It was named after Ross and Keith Smith, early Australian aviators. The family lived there until the mid 1930s. It had been a dairy farm.

In her book Badgally Road Campbelltown: The Other Side of the Line, Marie Holmes writes that she believed the house to be built in the 1860s. Photographs show a fine colonial building that had a deep stone flagged verandah and also turned wooden columns. There was also a verandah at the back. The second floor had balconies at the back and front. There were 6 rooms plus a pantry, bathroom and laundry. The bedrooms were on the above level.

Marjorie Morris (nee Bursill) lived in the house with her family in the 20s and 30s. She told the story of how they used what was called an Aladdin Lamp which they placed in the centre of the kitchen table. Their pet magpie would sometimes roost in the open window and would often fly down to join the family. As he swooped the draught of air put the lamp out and they would have to sit in the dark until the lamp cooled down and they could light it again.

The farm and house passed through a number of hands after the Bursills. In 1958 the farm and house name were changed to 'Claymore' by Kenneth and Sarah Vanderbilt. Alterations were made in the 1960s to the upstairs verandah and more columns were added. In 1970 the property was sold to the State Planning Authority who in turn transferred it to the Housing Commission for the development of Claymore suburb. On 28 January 1971, when the house was vacant, a fire gutted the home and left it derelict. Water to fight the fire had to be pumped from a nearby dam. The house was demolished in the late 1970s. It was located on what was Claymore Reserve before the redevelopment took place. 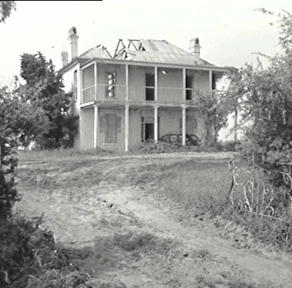 The front view of the house in 1977 after the fire. It was now known as 'Claymore'.

HOLMES, Marie 2000
Badgally Road Campbelltown: The Other Side  of the Line
Campbelltown and Airds Historical Society
Posted by Andrew Allen at 16:37