Bushranger for a Day

A previous post was written about Henrietta Fletcher, the daughter of a female convict who settled in the area and is buried in St Peter's Church of England Cemetery at Campbelltown (see http://campbelltown-library.blogspot.com.au/2013/09/a-tale-of-two-ladies.html.) Henrietta was born on the First Fleet ship Lady Penrhyn in 1787 and married ex-convict Edward Fletcher. They later settled at Elderslie.

I recently discovered in Peter C. Smith's comprehensive publication The Clarke Gang: Outlawed, Outcast and Forgotten that Henrietta's grandson William Fletcher was involved with the Clarke gang of bushrangers and their raid on the gold town of Nerrigundah in 1866. Although it was William's first day as a bushranger, it was to cost him his life.

In 1838 William's family moved from Campbelltown to Mullenderee, on the northern side of the Moruya River, where they became small settlers. William was the seventh of eight children and the first of the family born at Moruya. He married in 1864 and had an eleven month old daughter at the time of the Nerrigundah raid.

It's not clear why William Fletcher became involved with the Clarkes. Peter C. Smith believes that Fletcher thought that with the support of the gang he could put his local knowledge to use, and that robbing someone of their gold was easier than digging for it. Prior to the raid on Nerrigundah, Fletcher had been working a claim at the Gulph diggings near the town. He knew the area very well and would've known Tommy Clarke through horseracing. He was described as an occasional jockey. William was with the gang when they returned from the Bega races on Sunday 8 April 1866 when they took possesion of a miner's hut on the road to Nerrigundah.

After robbing a number of victims there the bushrangers made their way to Nerrigundah. It's believed they heard that the police sergeant was away and the only policeman in town, Constable Miles O'Grady, was ill in bed with a fever (they did not appear to know about a newly arrived constable). After raiding a number of people in the town as well as Pollock's store, Miles O'Grady received word of the bushranger's visit and bravely got off his death bed to confront the men. After a shoot out with the bushrangers, O'Grady was killed but not before shooting William Fletcher. Fletcher was shot just below the armpit and lingered on for an hour before dying. He was found with money and property indicating that he was a willing participant in the events.

William Fletcher had the shortest career in Australian bushranging history- just one day. He was buried not far from where the shooting took place in unconsecrated ground and not far from where a monument to Miles O'Grady was constructed by the people of Nerrigundah. His grave can still be seen today. 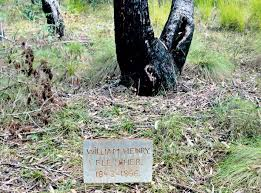 For a full account of the raid and the story of the Clarkes, I encourage you to read Peter's brilliant book. It's available from Rosenberg Publishing.