Do you remember when Campbelltown Mall was being built? Only three years after Macarthur Square was opened, Campbelltown was to have another shopping centre constructed. Bulldozers began their work in 1982 clearing land once owned by Fred Fisher for a double level complex.

Local resident Max Bancroft thought it was a good idea to record the various stages of building. Max worked in the telephone exchange located next to the site and took his photographs from the roof of the exchange. The images are valuable not just because they show what the mall looked like during its construction but because they also show what the town looked like in 1982. I've included five such images that best reveal this. Clicking on each image will give you a larger version.

Thank you Max for donating these fascinating photographs to Campbelltown Library. 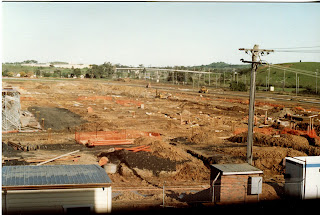 This image is looking south-west from the roof of the telephone exchange. In the background is the overhead bridge on Gilchrist Drive. The graders are on what is now Hurley Street. 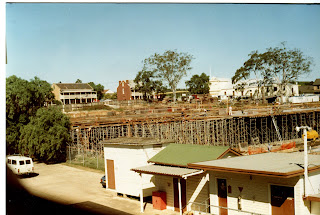 In this photograph the colonial buildings in Queen Street are visible as well as the old Campbelltown Theatre. The Good Intent Hotel had only just been demolished to make way for the new mall. A brave campaign was waged by Councillor John Hennessey to save the large trees in front of colonial building on the right. Fortunately his efforts proved successful. 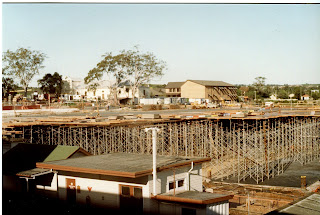 A similar view looking towards the old theatre. Note the two large block of flats (or shops?) behind the theatre that are long gone. 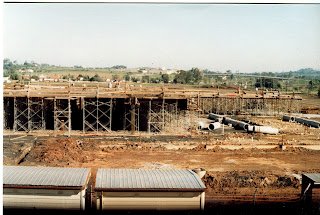 This shot is looking south toward the Campbelltown Catholic Club. In the background is Macarthur Square. The road in the middle distance is Camden Road with a much smaller Catholic Club and a number of houses along it all since demolished. 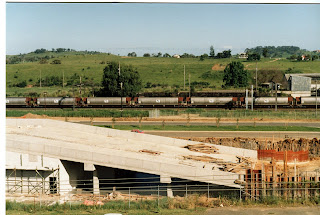 This photograph was taken by Max Bancroft from the roof of the exchange looking west toward Blair Athol. In the foreground is the ramp that leads up to the upper car park of the mall.