A small pamphlet recently unearthed (see below) announces the “United Tent Mission” - opening in Campbelltown on the 15th August 1915 and continuing until the 24th August 1915. The evangelist Mr J.T. Furnass would feature in the Mission Tent which was to be erected in “The Reserve” Queen Street – what we now know as Mawson Park.
John Thomas Furnass, a native of Yorkshire, had arrived recently from England, where he also conducted missions as an evangelist. He was connected with the London Evangelization Society whose aim was to send suitable preachers to conduct special evangelistic services in churches or halls wherever the Society was asked. The Australian organisation was built upon the very successful precedent of its London counterpart.

From 1915 until his passing in 1940, J.T. Furnass held missions in tents, halls and churches all over New South Wales, up and down the South Coast, in the Southern Highlands, in the suburbs of Sydney, North to Cessnock and beyond, and out west. And so he found himself in a tent in Campbelltown for 10 days in August 1915. Newspaper reports of his missions indicate his success at bringing souls to the Lord.
His obituary referred to him as “the big man with the big voice”.  He died as he lived, called to God whilst preaching the Gospel. 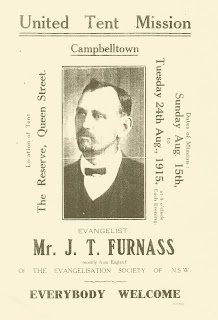 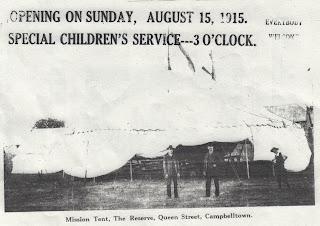