Queen Street in the Late 1960s 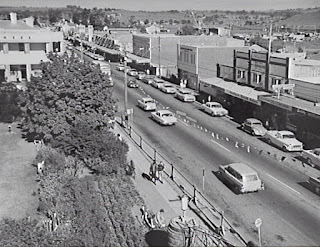 Time for a walk down memory lane. This photograph would've been taken from the roof of the old Macquarie Cinema on the corner of Queen and Browne Streets looking south west.Those of you living in Campbelltown in the late 1960s would remember this part of Queen Street back then. (Click on the image for a larger version)

In the foreground on the left is Mawson Park with the Club Hotel also on the left on the corner of Queen and Cordeaux Streets. On the other side of Queen Street starting from the right is Ted McPherson's butcher shop which was at 151 Queen Street. Moving left and next to the butcher is Richie Hand's barber shop. Next to that is a milk bar owned by Con and Peter Papapandos and formerly operated by Grallelis'. Then we have a group of 2 storey buildings. The first on the left belonged to Ryall, Smith & Co, accountants, typing, duplicating and photocopying. It was upstairs and above Carolyn's Frock Salon. G E Eves, photographer was next at 157 Queen Street and this was also upstairs. Geoff Eves took this photograph and took many street scenes around this period. He still lives in Campbelltown. Moving left we had William B. Leckie, Chemist, at 159 Queen Street.

Moving further to the left, a vacant block of land sits beside two large buildings. On the right is the Bank of NSW, previously the Balalaika Cafe. On the other side of the vacant block is the Commercial Bank of Australia, later Bank of NSW and then Westpac. On the first floor was M R Newton, solicitor and J M Daly, surveyor. This site used to be occupied by Reeve's Emporium. Patrick Street is on the other side of this building.

Just out of the picture to the left is Lack's Hotel which was on the corner of Queen and Railway Streets.

Do you remember these businesses? We'd love you to share your memories with us!