The Glenquarie Shopping Centre (Stage 1) was officially opened on September 29th, 1975. Built at a cost of $2.75 million, the centre was financed and developed by Campbelltown City Council, the first time a local government had entered into such a venture.  The centre contained 28 shops and banks, the largest of which was the Coles New World Supermarket.
One of the stores contained the first Glenquarie Library in a shopfront. This was described as the cheapest “shop” in the Glenquarie centre, being free to all residents and ratepayers.(see picture below).
Eight years later, on September 3rd 1983, Stage 2 was opened, which included the new ‘stand-alone’ Library and Neighbourhood Centre, as well as doubling the floor space of the shopping centre and increasing the number of shops to 56.
From small beginnings in 1975, Glenquarie Library has grown from 2 staff and just under 2,000 items, to 5 staff and approximately 24,000 items in 2015. 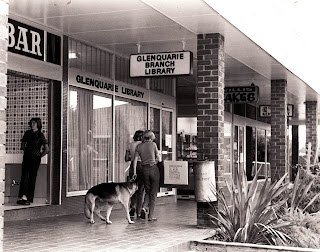