The Murder of Ellen Hyndes

On the afternoon of Friday January 22, 1847 a man by the name of James Fitzgerald was walking towards a house on the Campbellfields Estate at Minto when he noticed a number of cattle gathered round in the scrub with their attention focused on something on the ground. Thinking that it might be the saddle and bridle that he came to look for he suddenly realised to his horror that it was the body of a young woman. The woman was lying on her back with the face and upper part of the body smeared over with clotted blood, which had recently flowed from a long and deep gash across the throat. He recognised the woman as 20 year old Ellen Hyndes.

Ellen had been married to a man by the name of Thomas Hyndes. He was killed the year before at the age of 33 when he fell from his horse. Although the devastation of her loss of her beloved husband and father of her two children was obvious to the locals, it didn't stop one particular admirer from making advances to the young widow.

John Kean was a ticket-of-leave man living in the same neighbourhood as Ellen Hyndes. Kean had become a frequent visitor to Ellen's house ever since the death of Thomas six months previous. After much persistence, Kean obtained her consent to become his wife, in return he would have to buy her some furniture and put it in her house. For reasons unknown she later refused to have the marriage solemnised, and returned his furniture to him which he sold off. Some time later they reconciled and he repurchased some of the furniture and returned it to her in the belief that she would accept his proposal. She expressed no interest this time which greatly upset Kean.

By coincidence a Constable McAlister was at Campbellfields with a warrant for John Kean for horse stealing, when Fitzgerald made his gruesome discovery. Whilst at the house of a man named Thomas Sharpe, he heard the voice of James Fitzgerald call out from the bush. He went over to investigate and an examination of the scene was carried out. The body lay about a half a mile from her house.

Later that day John Kean made his way to Reeve's Public House at Narellan with intentions to leave the district the next day. He knew the police would be on his trail. Constable Charles Bamford of Campbelltown made a statement "I had information that he (Kean) had been charged with horsestealing and murder; I went on Saturday morning, the 23rd, to Reeve's public house at Narellan; Kean was sitting under the verandah, the moment he saw me he ran through the house into the bush."  After running about a mile, Kean was apprehended and brought to the watch house at Campbelltown.

John Kean made a confession to the murder of Ellen Hyndes on the 29th of January. He declared:

I murdered the woman and wish to suffer for it. I came to Campbelltown on Thursday, and went to James Hogan's house in which his mother resides. I arrived there about two or three in the afternoon. We began talking about Ellen Hyndes, and about a brother of his named Michael Hogan marrying her. We talked about nothing else that evening. I remained there that night, and next morning pretty early James Hogan and I left the house together, taking different roads, and we both met in the bush, not far from Ellen Hyndes house, and after waiting some time we saw her coming towards us. James Hogan first took hold of the woman and threw her down, and tore her shawl ; she got up and ran away, and I got hold of her and threw her down again, and James Hogan then gave me the razor that he had purposely brought to kill the woman; I then cut her throat. The night previous we had arranged how we were to murder her—that one was to hold the woman, while the other cut her throat. The reason for Hogan joining with me to murder the woman was, that he did not wish his brother to marry her. After we had murdered her we both returned by different roads to Hogan's house; I got to the house first, and he about ten minutes after; this was about 11 a.m.; after I had cut her throat with only one cut of the razor, I gave the razor back to Hogan; no blood came on my clothes; the mother of Hogan came into Campbelltown that day, and on her return, said there was a report about my stealing a horse; I then left the house and went over to Reeves's public house on the Cowpasture road, and remained there until the next day, when I was taken and brought into Campbelltown by constable Charles Bamford; no one knew of the murder but our two selves; Mrs. Hogan did not know of it, and Michael Hogan was not at home; I was aggravated to the deed by the jeering of the ogans (sic) and others.

James Hogan was initially taken into custody on the suspicion that he aided and abetted in the murder. He was later cleared of any involvement as the only evidence against him came from the confession of John Kean. He was later put on trial for misleading the police. The charge was proven and he lost his ticket of leave.

During Kean's trial it was brought up that he became jealous when he received word that Ellen was about to marry a man by the name of John Cremer. This was the real reason behind her refusal to marry John Kean.

A number of witnesses were called up at the trial and each gave damning evidence against Kean. One stated that he had heard Kean make several threats as to what he would do to Ellen if she did not marry him. One such threat was that before he was humbugged any longer by her, "he would go on the Sydney gallows". Another witness claimed that Kean came to her shop the day before to buy a knife and a handkerchief- the same patterned handkerchief that was at the scene of the murder and presented in court.

John Kean made no other defence other than the assertion of his innocence, declaring that the confession attributed to him was made while he was in a state of excitement from drink, so that he did not remember anything about it.

The jury, after having retired for a few minutes, found a verdict of guilty. The judge addressed the prisoner "solemnly as to the heinous nature of the crime which he had been proved, beyond all manner of doubt, to have committed."

John Kean was executed at Darlinghurst Gaol on April 30. He was reported to be penitent, and his conduct and demeanour uniformly pious. Since his confinement he became very corpulent. His appetite never failed him right up to the day before his execution.

Ellen Hyndes was buried in the same grave as her husband at St John's Catholic Cemetery, Campbelltown. The grave can be seen in the photograph below. 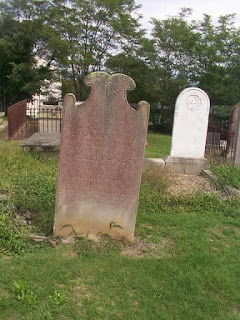