Few of us today have the luxury of living close to work. Most of us waste long hours on clogged freeways endlessly staring at bumper stickers or tail lights. For one lucky Campbelltown identity however, work was literally just across the road.

Eugene Glyde Wells, better known as Hughie, was born in Shoreham in Sussex, England in 1886. At an early stage in his life he lived on The Isle of Wight where he was apprenticed as a stonemason. He moved to South Africa and later came to Australia. Hughie was a monumental mason in Campbelltown after arriving here about 1940. 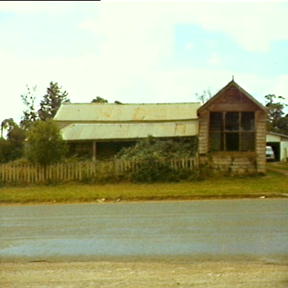 Hughie and his wife Ethel lived and worked in a house in Broughton Street directly opposite St Peter's Church of England Cemetery. He was responsible for making headstones for the cemetery during his time living in Broughton Street. The house was demolished not long after the photo seen above was taken in 1977. The Scout Hall now stands on the site.

Not much is known about Hughie. A local resident remembers him staggering out of Lack's Hotel and getting into his little ute and wobbling his way down Queen Street before turning into Broughton Street. His son Frank, who lived in nearby Warby Street, worked with him at the stonemason's yard. Hughie died in Campbelltown in 1973. 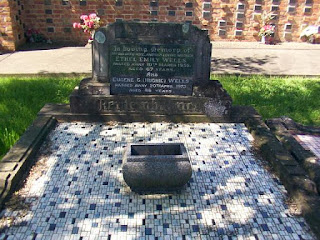 Hughie and Ethel's headstone in St Peter's Cemetery
Posted by Andrew Allen at 11:28