Where was our first racecourse? 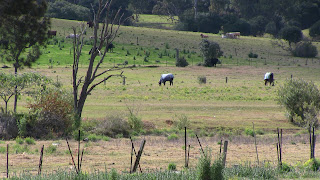 A few weeks ago I met up with author and racing enthusiast Bob Charley to see if we could locate where the area's first recorded race meeting took place. Former resident and local historian Verlie Fowler's research revealed that "A private racecourse was established on the flat below Varoville" and it was here that the races of 1827 were held in the vicinity of Bunbury Curran Creek. The land remains as open paddocks although partly covered by the Hume Highway. Carol Liston, the author of Campbelltown- The Bicentennial History, suggests that this 1827 meeting was held by Colonel Henry Dumaresq for the Sydney Turf Club.

After a visit to the flats below Varoville homestead Bob and myself came to the conclusion that this piece of land was the only area flat enough to have a race course constructed (see the photograph above). We looked out over the hills surrounding the flat and imagined the crowd roaring for their nag to bring them victory. The Australian reported that "The Campbelltown people had a prime day's sport on Monday. The place was crowded with up-country bucks, from far and near, and all was fun and bustle and activity." The following week, however, the same newspaper hinted at what had been publicised as the first "dead-un" in Australian racing: "The Campbell Town Races, which took place last week, though they were carried off with so much eclat, and afforded so much fine sport, has given rise to some dissatisfaction among many of the sporting gentry, in consequence of Spinks losing the race against Cullen's horse. Spinks rode Hammond's and though, throughout the race, some good judges declare he had not a chance for winning, yet others do not hesitate to call it a cross. A meeting, we hear, has been on the subject, and Spinks has offered to run the race over again, provided a bet, worth contesting for, be made by the owner of the winning horse." Nothing however came of the matter.

Bob Charley is working on a new book on early NSW racecourses. He has been involved in racing administration including Chairman of the AJC, Racing NSW and the Australian Racing Board. He was inducted as an Officer in the Order of Australia in 2001. He has previously published a book called "Heroes and Champions" about the history of horse racing in Australia.
Posted by Andrew Allen at 13:06