The library has purchased the remaining rare historical photographs of Campbelltown places from the State Library of Victoria (see http://campbelltown-library.blogspot.com.au/2015/05/historic-photographs-unearthed.html). It's exciting to be able to show these wonderful old images to you at a high resolution. So here they are! Remember to click on the image for a larger one. 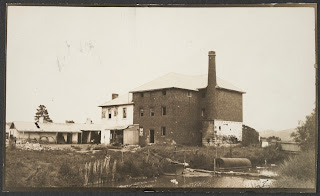 This photograph has the title of "One of the 1st Mills in the Colony Erected about 1817". The mill was actually erected in 1845 by Laurence Kendall and William Orr. It operated as a steam-driven flour mill. In 1861 Sims, Barker and Bocking leased the mill. James Bocking later purchased the property and it became Commerce House. Bocking and his sons used it as a grocer, baker, draper and general store.

Dr William Mawson demolished the mill in the 1920s and converted the adjoining mill house into Milby Private Hospital.

This scene has changed dramatically. The only structure remaining is the now dilapidated old Fisher's Ghost Restaurant, the former mill house. The waterway now runs underground close to where McDonald's drive through is now located. It once ran under a bridge that spanned Queen Street in front of today's entrance to Campbelltown Mall's underground car park. The photo is dated 1924. 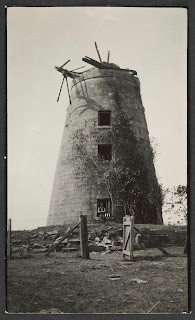 This image has the title of "Old Mill at Mt Gilead, Campbelltown". Note the man sitting in the window at the bottom. The wooden sails have almost gone. This shot was taken in 1924, almost a hundred years after it was constructed. The windmill still stands today on the property and can be seen from Appin Road. 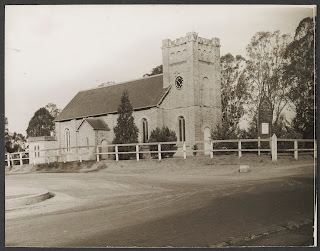 This one is of St Peter's Church of England taken on April 4, 1940. On the western side of the church is Howe Street which used to run from Browne Street to Cordeaux Street. It was removed in late 1969 and grass laid on it for an extension of Mawson Park. 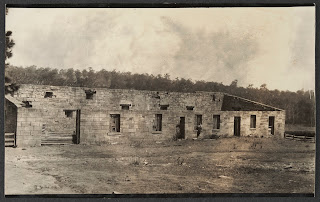 The title of this photo really intrigued me when I first read it. It's titled "Convict Gaol at Mt Gilead Near Campbelltown" and taken in 1925. I had never heard of a gaol at Mt Gilead and wondered why it was there. After doing some research I believe the photograph could be the old servant's barracks. In the July 1994 issue of Grist Mills, Verlie Fowler refers to a photograph taken by Frank Walker entitled "the old barracks, used for accommodation of the assigned servants in the early days". It showed the building without a roof like this one. Is this Walker's actual photograph? She did, however, state that evidence had yet to be found to support this being a barracks.
Posted by Andrew Allen at 13:45