Alpha House was originally known as Patrick's Hotel and not long after the Coach and Horses Inn. It was built in 1842 by Anne Byrne and was then owned in the 1840s by Charles Morris who had a mill coaching service.

The building had many uses during its existence. There is evidence that it was once used as a court house and even a gaol. The building was also used for Presbyterian church services by Reverend Gilchrist. It was once known as Hammond's Grammar School and about 1860 it acted as a School of Arts. It then became well known as the home of local politician John Hurley MLA. Hurley died here in 1882. The Hurley's continued to live there at least up until the death of John's wife in 1892. Some time prior to 1930 it was used as a private school run by Miss Whittingham. She boarded upstairs and used a room as a classroom.

The building was wonderfully palatial.  It had two storeys at the front and three at the back and eight bedrooms, four sitting rooms, a large ballroom and hall, cellars, detached kitchen and laundry. There was also a coach house and stabling for 16 horses. It was made of brick with its front verandah flagged in sandstone and the slate roof supported by Georgian pillars of wood.

After Miss Whittingham left, the building was used by Daniel Longhurst up until 1938. Demolition of the building commenced on 5th July that year to make way for the new Commonwealth Hotel which was to later become the Good Intent Hotel. Bricks from Alpha House were used in its construction. The Good Intent was demolished in 1982 to build the new Campbelltown Mall which opened in 1984.

Luckily there are a few photographs of Alpha House. They show us what a grand building it was. 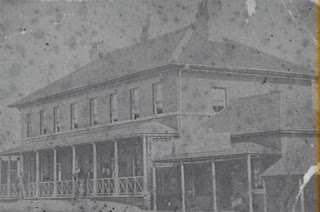 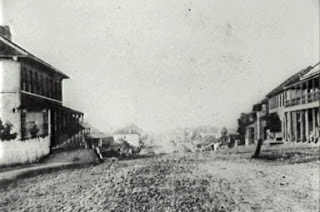 Looking North on Queen Street with Alpha House on the left. Taken in 1875. 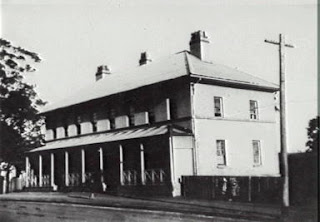 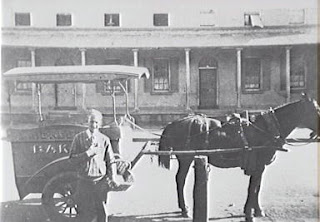 1937 photograph of Richard Watkins in front of a horse-drawn baker's cart in Queen Street with Alpha House in the background (Cooper Collection. Courtesy Campbelltown and Airds Historical Society)
Posted by Andrew Allen at 15:38